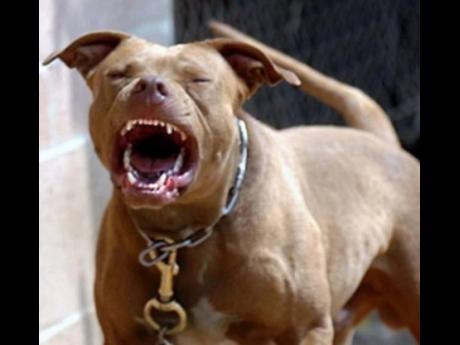 A month after a harrowing experience being pinned down for more than three hours and mauled by four pit bulls while out exercising, a St Andrew teacher is remaining optimistic about her eventual rehabilitation even as she remains hospitalised.

When The Gleaner spoke with her at her bedside last week, the educator was in good spirits despite the tough road to recovery ahead, as apart from the physical scars, she will have to relearn routine functions such as walking.

As she battles repeated infections caused from the dog bites all over her body – mostly to her upper body and lower limbs – the family, though not bitter with the owner of the dogs, is pursuing legal action.

In an exclusive Gleaner interview, the woman’s daughter, Tameisha Sherwood, who is a medical doctor, struggled through recalling the first sight of her diabetic mother’s wounds in hospital.

“When the doctors started taking off the bandages to assess the wounds after she was transferred, I started crying because they were very large and deep holes. I could see tendons, muscles and blood vessels. I realised also that the left ear was gone. It was very, very awful and overwhelming. Right now, she can’t do much with the right arm because of the damage to the tendon,” Sherwood said.

“While in hospital, she developed complications caused by infection in the left knee. I don’t think she will be leaving hospital for now, because she is diabetic and may have diabetic seizures. She is battling infection of the wounds and infection of the left ear,” Sherwood further said, adding that her mother has already undergone two surgeries to that knee.

“Pain prevents her from getting out of bed. Since the left knee got infected, she has not been able to walk.”

She said that an outpouring of support and prayers have been helping the family to go through the hard recovery process.

“I have been getting a lot of support from the Jamaica Teachers’ Association (JTA) president, Owen Speid, and other teachers. A lot of schools have been giving donations in cash and kind. The St Richard’s family, [including] the parent-teacher association, has been very supportive. We’ve been getting a lot of prayers and that is what helps to carry the family on strong,” Sherwood said.

According to her, the neighbour who owned the dogs and was at times her mother’s exercise partner has been very remorseful over the incident.

“Exercising is how a friendly relationship started between them,” the daughter told The Gleaner.

She revealed that the man has visited her mother a few times in hospital and is usually “very tearful and sorry”. As such, she says the family’s efforts to seek legal redress is not a personal attack on the dogs’ owner.

“We want compensation. We have hired a lawyer. Being a legal case, we cannot accept money from the owner of the dogs. He, however, has given Mommy a gift basket,” Sherwood said.

“The message is that we must be more responsible citizens. If you have dangerous animals, you need to make sure you contain them so they don’t pose a risk to people. It is not like he intentionally set the dogs on her, but at the same time, he has to be accountable, because if you have dogs like those, you have to make sure that you secure them. I understand that if you are going away and you want to secure your property, you can’t chain the dogs, but at least make sure that the fencing or the gate is secure so they can’t leave the compound,” she added.

JTA President Speid is urging Jamaicans to rally around the educator to help facilitate her recovery if the family asks for assistance.

“She needs support from all of us. There will be some expenses that she will have to take care of. I am not sure if she will be doing any more operations soon, but if that is so, we will be calling on the wider society to donate blood on her behalf,” he said.