JIPO: Ja can’t gain from commercial use of national symbols 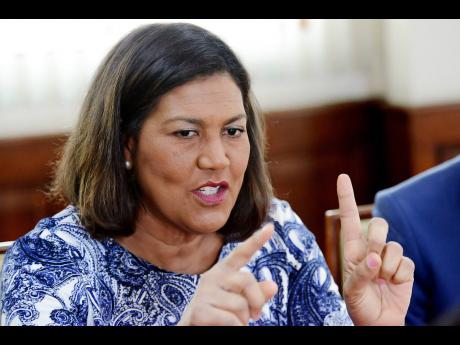 Despite more than a decade of aggressive lobbying to protect Brand Jamaica internationally, there is resistance from other nations profiting from the use of the country’s name.

“There has been a pushback from other member states because they are all benefiting from the reputation or use of the name Jamaica and other names of countries that seem to be exotic and seem to have a nice association, so basically, what this means is that people recognise the value of the use of the word ‘Jamaican’ on their products,” she said.

There were mounting concerns on the weekend about the improper use of Jamaica’s national symbols and emblems on apparel being sold on Kanye West’s Sunday Service website following his performance in Emancipation Park on Friday night.

It was later revealed that West did not seek permission from the Government to use the national symbols and emblems and the merchandise was subsequently pulled from the website.

Bellamy said that while Jamaica does not earn from others using its name and symbols on products, permission should be sought from the relevant authorities.

“Part of the reason for seeking permission is that you are going to be using it on a product or service that, hopefully, wouldn’t do harm to the reputation of the country, so the permission will not always be granted because it depends on the use that you want to affix the emblem or symbol,” Bellamy added.

She said that Jamaica should take advantage of its brand value and produce authentic local items.

The use of Jamaica’s brand on products not originating in the country is not new, according to Andrew Gray, managing director of Gray’s Pepper Products Limited.

He said that there is not much that can be done to stop the use of the country’s name and associated symbols on products.

“This is something which I have discussed before. It’s the consumer; you have to educate the consumer. There is nothing that we as a country can really do.

“I have been in this business for over 30 years and I have seen it from day one. Products made in Costa Rica Jamaican style … because the Jamaican brand is strong. People are going to try to use it as much as possible,” Gray said.