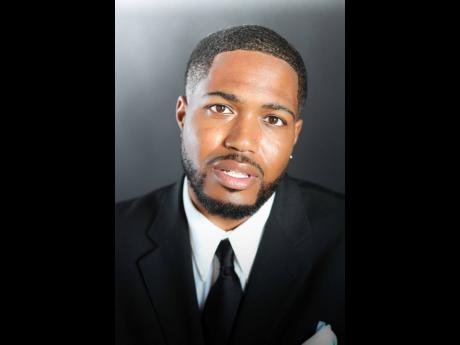 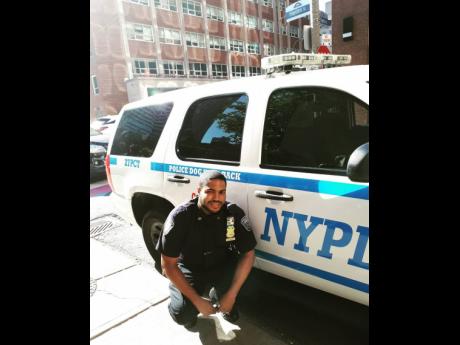 Contributed
The irony of Mayne Champagne playing a police officer in a TV drama. In his previous life of crime he’d never cooperate with the police.
1
2

Mayne Champagne Lawrence, an only child, was born to Jamaican parents in Toronto, Canada. His upbringing in Scarborough was pretty normal, attending public school, participating in community summer cookouts and barbecues and enjoying the abundance of Jamaican culture in his neighbourhood. He was bright, did well at school and read above his grade level.

During the weekdays, after school, he played basketball and did piano lessons. Sundays were reserved for church and there were no exceptions. His mother, Sister Peaches, was a devout and dedicated Pentecostal. She was an executive member of a church in Scarborough where she founded the junior choir. So, naturally, she made sure that her son was an active choir member. This was an important accomplishment for her, and his participation was a source of great pride.

However, there was something in Mayne’s family life that was a little different. His father was not present. Like cell phones travelling outside the coverage area, some Jamaican fathers have a tendency to roam. But in Mayne’s case, he recalls meeting and seeing his dad only once – for a weekend. And any mentions, discussions or lingering curiosity about his father at home were quickly brushed aside and avoided by his mom.

“My mother never spoke of him,” Mayne confessed. “He was never brought up in conversation, and now, as a grown man looking back, I think his departure deeply hurt my mother as I never witnessed her getting close to another man, let alone dating a man,” he added. “My only memory of my father was when I was eight or nine. My mother had finally tracked him down and they agreed to meet up for a weekend at a hotel near Niagara Falls. That was the only time I remember physically seeing my father and, shortly after, I gathered he was deported from Canada for using someone else’s identity.”

A year or two later, when he was about 10 or 11, Mayne travelled to Jamaica for the first time. He thought he was on a vacation with his mother, visiting attractions like Dunn’s River Falls and Rose Hall Great House. But he was to learn later that the real reason for the trip was to hunt for his elusive father. For the son, the trip was an exciting island adventure. But for mom, it was a very disappointing final boarding call for the father of her only child.

Back home in Canada, a strict and inflexible Sister Peaches worked nursing jobs to take care of her son and herself, and to create a happy home. All her free time was reserved for church activities, and eventually she made unsuccessful attempts to become a pastor and establish a church. Thanks to the piano lessons and the immersion in the church choir, her son, Mayne, developed a passionate interest in rap and R&B music and wanted to perform at school concerts. But she shut him down, refusing to sign the consent forms for his participation. She had no intention of entertaining even the faintest hint of secular interests within the impenetrable brick walls of her world. Facilitating her son’s talent would be a big, fat sin, and pastor would certainly not approve.

Disillusioned, frustrated and unhappy, her teenage son took to liquor, weed, bad company, late nights, and, by 16, Sister Peaches’ most prized and adored earthly possession, her one son, was selling crack on the cold and uncaring streets of Toronto.

At 17, still a teenager, Mayne had his first outing with serious crime in Scarborough. In the fall of 1999 he was involved in a home invasion, accompanied by three accomplices.

“I targeted the house based on a tip in the neighbourhood. We were after cash and valuables. We tied up the occupants and ransacked the home. My accomplices got arrested first and then my best friend implicated me as he was the only one who knew my real name and where I lived. I ended up getting two years in juvenile prison and was released on September 11, 2001, the same day of the World Trade Center terrorist attack.”

Mayne was 19 when he was released. The anger for his mom now ran deep, and it was further intensified by the fact that she refused to bail him out while he was in trouble, but she happily posted bail for a young man about his age at church who was in a pickle. Despising his mom, he moved in briefly with his aunt but that didn’t last long as her husband suspected he was doing drugs and they became uncomfortable with him living with them. He was in and out of their house and not adhering to their rules. His aunt was at the end of her rope. She didn’t want to put any undue stress on her home life, and in the interest of a happy marriage, she asked her nephew, Mayne, to pack and go.

“After my aunt kicked me out I moved into an apartment in London, Ontario, with a Detroit pimp I met while doing time in the juvenile prison. I was still young and green, and he put me on a few armed robbery moves, but he himself stuck to pimping, presumably a more glamorous career path. A year after my release from juvenile prison I was picked up by the police for armed robbery of a general store and I was sentenced to four years in the Joyceville Penitentiary in Kingston, Ontario,” Mayne recalled, the details still fresh in his mind as if it happened yesterday.

More escalating trouble was to come Mayne’s way. His third incarceration resulted from a January 2010 incident where his cousin was robbed, and Mayne says he got involved to defend his blood relative.

“Me, my cousin and another man lured and drove our intended victim one winter night to an isolated area near the Toronto Zoo, under the pretense of going there to buy guns. Our plan was to kill him there but he suspected something was wrong and he jumped from the moving car and managed to call the police. My speeding car got stuck on the muddy backroads. Soon enough a tow truck came by. But minutes later we were surrounded by police who searched the car. Two handguns were found that I took responsibility for, and I was sentenced to five years at Collins Bay Penitentiary in Kingston, Ontario. With me owning up to the crime of weapons possession, my cousin and the other guy were able to walk with only a short period of detention.”

After Mayne Champagne Lawrence’s early release from prison in 2013, being incarcerated became his new normal. He had been working through the regional penitentiaries as if they were luxury resorts, all meals included. An additional bonus was that he didn’t even have to make decisions for himself as those were made for him by the penal system. But, still, something was missing and he felt there was a void in his life.

“As much as my mother tried her best to raise me, only a father could instil the type of discipline that was necessary to keep me on track. The emotion of disappointment and discouragement overwhelmed me. Not having the support of my mother in the music affected me in a big way, and I stopped caring about myself and my future. I made detrimental decisions based on emotion instead of logic, and those cost me years of freedom and set me back greatly,” Mayne lamented.

“Good girls love bad boys, so the honeys would come and go, but my only constant and faithful friend was music, and it was always there for me no matter what.”

Miraculously, a turnaround came in Mayne’s life and it happened in a strange way. On the first day of a new job as a machine operator, he was told to wait in the hospitality room until the supervisor could brief him. His thoughts drifted towards the television screen, and up popped a familiar face, a woman, on the news channel. She was wanted by the Toronto police for pouring a corrosive acid on a child who was instantaneously disfigured. An unusual news story for Canada. Only, the woman was his mother.

“Seeing this was a jolting, cataclysmic shock. I had to stare at the TV screen to be sure. Prior to this, I knew my mom suffered from mental illness but she had never hurt anyone before. At that moment, I came to a dilemma and a crossroads in my life. Coming from the streets, you never cooperate with the police. But I knew there and then I had to turn my own mother in before she caused more damage to herself and others. And while doing so, I made another decision – to stop caring about what friends thought about me and to start making decisions that were in my best long-term interest,” Mayne revealed, wiping away the tears caused by the unhappy memories.

He said the upheaval from that incident forced him to turn his life around. With neither mother nor father as a source of encouragement, he realised he was now on his own, and that reality triggered in him a new determination and a new creativity that pushed him to new heights. He secured a position interning at a recording studio, and from there he mastered new music skills that enabled him to find success and fulfilment through a number of projects that took off, including a collaboration with Canada’s rap sensation Drake. Finally, he was thinking clearly and logically, and he now felt empowered and emancipated to pursue productive dual careers in music and acting, two areas that bring him great joy.

And a message of redemption for young men either in Jamaica or in the diaspora, who may feel lost, lonely and marginal in the streets?

“The magic of the streets is a lie. You have a greater mathematical probability of being a successful general labourer and owning a home than being successful selling drugs and doing crime in the streets. More than 90 per cent of the people I know in the streets only have a fancy car, a gold chain, maybe gold teeth, and nothing else. Usually they end up dead, incarcerated or doing the same general labourer jobs that they despised and made fun of in the first place. And one more thing – in life, it is never too late to follow your dreams,” Mayne said.