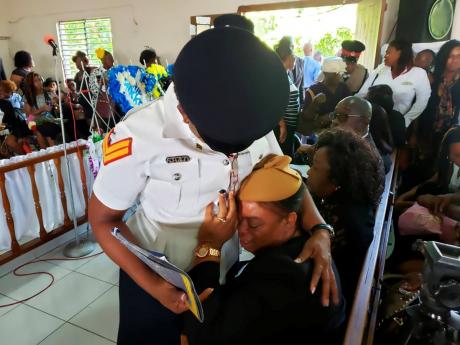 Contributed
Paulette, widow of Joseph Donaldson, a district constable, is comforted by a member of the police force at the funeral service for both Donaldson and his son, Mikkel, who died tragically weeks apart. The service was held yesterday at the Seaforth Seventh-day Adventist Church in St Thomas.

Hundreds of mourners converged on the Seaforth Seventh-day Adventist Church in St Thomas yesterday to celebrate the lives of a father and son who both died under tragic circumstances.

Members of the Jamaica Constabulary Force (JCF) and the Jamaica Urban Transit Company Limited (JUTC) were in attendance to pay their last respects to 58-year-old District Constable Joseph Donaldson and his son, 35-year-old Mikkel, a bus driver.

Joseph Donaldson, who was described as a dedicated police officer, fell from the roof of a building to his death on September 12. Two weeks later, his son, Mikkel, was shot dead in what was alleged to be an act of reprisal following the killing of a taxi operator in Kingston, a murder for which another JUTC driver has been charged.

The painful wails of Joseph’s wife, Paulette, who is also employed to the JUTC, echoed throughout the church as her husband’s body, followed by that of his son, was taken inside the building.

The decision to host both funerals on the same day and at the same time was criticised by some onlookers, who believed that members of Mikkel’s family were not getting the support and attention they deserved.

“The police dem take over the entire funeral. It just look like a the father alone because all of the attention is about him. Over an hour now, and I don’t even know if Mikkel part start,” said one woman who had become increasingly impatient with the order of the service.

In his brief address to the mourners, assistant force chaplain of Area 4 Pastor Kevin White compared the family’s misfortune to that of the Bible character Naomi.

“Tragedy doesn’t strike same place twice, but it did. Naomi had to contend with the death of her husband and sons. She was left to lay them to rest. When it rains, it pours,” he lamented.

Father and son were buried adjacent to each other at the Trinityville Cemetery in St Thomas.