Late Munro student hailed as brilliant and active in sports 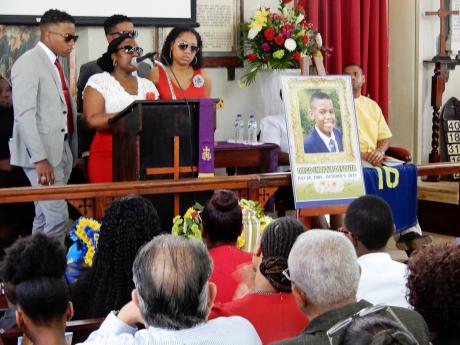 Contributed
Diego’s family members paying tribute to him on Saturday at a thanksgiving service held for the late Munro student at the Wesley Methodist Church in Brown’s Town, St Ann.

Diego Enrique DeSouza, the 14-year-old Munro College student who died on October 9, has been described as a brilliant student who excelled at both sports and academics.

The thanksgiving service for his life, held on Saturday at the Wesley Methodist Church in Brown’s Town, St Ann, drew a crowd that packed both the church and church hall, spilling over into the churchyard.

The support from schools was huge, with institutions such as Westwood, Hampton, and William Knibb high schools; Montego Bay Community College; and Perth Town Academy, where Diego’s father is principal, joining the group of around 40 Munro students who journeyed from St Elizabeth for the service.

Named after Argentine football great Diego Maradona by his dad, Shaunovan DeSouza, a former William Knibb, All-DaCosta, and Village United footballer, Diego was a member of his school’s Under-14 and -16 teams and was a popular and well-loved student.

“His intelligence stood out. He was a superb footballer,” Munro principal Mark Smith said in his tribute to Diego.

Smith later told The Gleaner that while the student’s death was still fresh in the minds of the school family, the Ministry of Education and the school’s counselling programme had been providing the requisite support for both students and staff.

“He was an amazing young man, a larger-than-life persona. He was very active in both sports and his academics, and he did very well in both pursuits,” Smith told The Gleaner.

“Diego can best be characterised as a student with great passion for life. He was very involved in a host of activities, both co-curricular and general academics, and he was exemplary at them,” Smith said. “In fact, I’ll tell you that his last paper, after his passing, his mother collected some of them, and one of them was 99 per cent. That just goes to tell you the type of student he was – a really brilliant student with a really sharp wit,” he said.

Diego was one of 247 boarders at the all-boys institution, which has a population of 1,023 students.

“The boarding population is a tightly knit community because they’re a smaller group, and everybody knew him on campus. Very cheerful, always had a skip in his step, a twinkle in his eyes – that’s the type of kid that he was,” Smith recalled.

The principal was not alone in his positive appraisal of Diego as family members who paid tribute and delivered the remembrance described their loved one as polite, respectful, and kind. “Heaven has made an angel. He will forever be loved. Shine on, Diego, shine on,” his cousin Ebony DeSouza said as she remembered him.

Diego died in his sleep, reportedly of natural causes. His body was cremated.

A note in the programme by the family thanked supporters for their prayers, comforting messages, and kind gestures.