UTech strike has students on edge 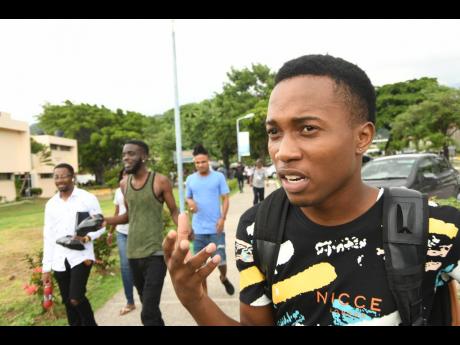 Rudolph Brown/Photographer
Kasey Robinson is lamentingstrike action by lecturers at the University of Technology, Jamaica is affecting his studies.

As a strike called by University of Technology, Jamaica (UTech) academic staff dragged on yesterday, students at the Papine-based institution have expressed concern about the impact of a stalemate between administrators and union officials on their studies in the lead-up to end-of-semester examinations.

Romario Davis is currently pursuing a Bachelor of Science degree in economics. He is thankful for the extra time he has been allowed to study but is worried about his future.

“Some classes have not been held, although some lecturers still come. I am personally glad I got a few more days to study. It gives us more time for preparation,” Davis quipped in finding a silver lining in the cloud of unease when a news team visited the eastern St Andrew campus on Tuesday.

The core of disagreement is centred around UTech’s failure to pay over outstanding funds to academic staff in a near-decade-long salary dispute.

President of the University of Technology, Jamaica Academic Staff Union, Lebert Langley, has vowed to keep his staff off the job until managers budge on the disbursement.

Workers received the first tranche of back pay in July this year, and expected payouts to be made in two other phases – October 2019 and April-May 2020.

The staff took weeklong industrial action beginning April 30 this year to get a resolution to Item 41 of the heads of agreement of 2015-2017.

But the minutiae of the arm-wrestling between UTech administrators and academics are of little importance to students like Danielle Mannings, who is wondering what will become of the hefty tuition fees she has to find each semester to complete her accounting course.

“I haven’t had a class since the start of the week. On Sunday, I had a test and I didn’t get to do it. It costs me $200,000 per semester to do this course. What is happening?” she lamented.

Her sentiment was echoed by Mercedes Shepherd, who is pursuing studies in communication arts.

“We are missing classes.The semester is almost over. We have a lot of work going on and this is affecting our output,” the young woman said.

“I just had a test postponed and it’s the second postponed since Friday. Come on now!” Robinson told The Gleaner yesterday.

Late yesterday evening, it was clear that the impasse was no nearer resolution. Langley told The Gleaner that he understands that the Ministry of Education will be seeking to press the finance ministry to disburse the funds.

Associate vice-president for advancement at UTech, Hector Wheeler, declined to give an update on the situation.

“I am not in a position to speak on the matter at this time. I will have the president call you,” Wheeler said.