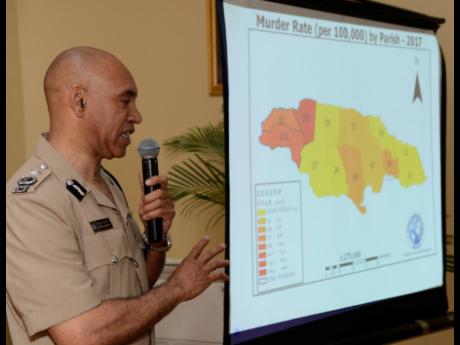 Taxpayers have forked out at least $232 million in a soaring bill related to deployment in the Government’s widening security crackdown across more than a third of the police divisions across Jamaica, but a plethora of absent data means that the constabulary’s operational expenditure is likely to be many millions more when the full cost is tallied.

Meals and accommodation, cumulatively $186 million, represent the lion’s share of the state of emergency (SOE) expenditure for fiscal year 2019-20, or about 80 per cent of total spend for the Jamaica Constabulary Force as at September 11, 2019.

St James, Hanover, Westmoreland, Clarendon, St Catherine (North and South), and St Andrew South are all under SOEs, with zones of special operations declared in Mount Salem and Denham Town, measures imposed in response to a spike in murders and shootings.

Approximately $90 million in meals has been swallowed by the police force, with St James taking the biggest bite, $50.4 million, or 55 per cent of the food bill. Next in line at the dining table is Hanover, with nearly $20 million; Westmoreland, $16 million; St Andrew South, $3 million; and St Catherine, $268,500.

Actual expenditure for accommodation stands at nearly $96 million, with the next biggest spend being $23.26 million spent to acquire portable toilets.

Additionally, St James outpaced all other divisions under SOEs in actual expenditure for the period April 1, 2019, to September 11, 2019, with a total spend of $93 million, followed by Westmoreland, $61 million; and Hanover, $56 million. St Andrew South has cost $14.54 million.

But the numbers revealed provide only a snapshot of the real cost of the security operation as the majority of line items, including logistical equipment and other incidentals, are unaccounted for in the documents for six of the seven police divisions, with only Westmoreland’s records being almost fully disclosed.

Information on the spend of the Jamaica Defence Force was not factored into this analysis.

Spokesman on National Security Fitz Jackson said that the Opposition is planning to ask for an audit into the expenditure.

“Just in terms of the direct spend, outside of whether the overall expenditure itself gives us tangible results, the prime minister, for one, would say that crime is down by whatever figure and, therefore, the SOEs are justified, but couldn’t we have achieved a similar reduction without that level of expenditure? The answer is yes,” he added.

In July 2018, Opposition Leader Peter Phillips said that SOEs cost the country around $30 million per month.

Recently, National Security Minister Dr Horace Chang revealed to Parliament that a combined total of 841 police personnel were needed to maintain SOEs. He said that such deployments were driven by ground conditions in the affected areas.

“The SOEs by themselves do not create the costs. The conditions that exist in the declared areas create the costs since the types and levels of deployment are in response to these conditions, irrespective of SOEs or other types of response,” stated Chang.