Shaggy to continue giving to Bustamante 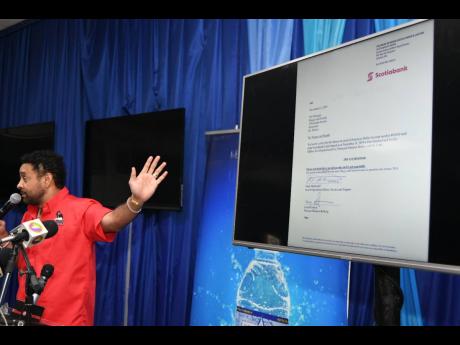 Rudolph Brown/Photographer
Orville ‘Shaggy’ Burrell shows a bank statement reflecting more than $112 million being held in a Scotiabank account at a Shaggy and Friends press conference at the Bustamante Hospital for Children in St Andrew yesterday.

Entertainer Orville ‘Shaggy’ Burrell said he remains committed to raising funds for the Bustamante Hospital for Children while publicly pledging $100 million towards the expansion of the paediatric institution yesterday.

The artiste yesterday hosted a press conference at the facility to account for $100 million raised through his biennial Shaggy and Friends concert in 2018. The Sunday Gleaner had recently highlighted the fact that the hospital was yet to benefit from the proceeds of the charity concert after nearly two years.

Burrell said the money was initially geared towards the expansion of the intensive care unit (ICU) and has been in a Scotiabank account which the Shaggy and Friends Foundation started in 2014. However, given the pressing need for more beds at the facility, as was highlighted by the hospital’s chairman, Dr Kenneth Benjamin, the foundation will be partnering with others to build a three-storey structure to treat more patients.

‘Do not involve Government’

He said that the policy was to hand over equipment to the hospital because the sponsors had expressed the desire that the foundation manage the funds.

“All the sponsors made it clear to me at that point and said, ‘Shaggy, we will come on board for this, but we do not want to involve Government’,” he said.

Burrell said that while he has no issue handing over the full amount, which, to date, is more than $112 million, the general approach over the years is to withhold a portion of the funds in the account to go towards the staging of the next charity concert.

Apart from a busy schedule, Shaggy said that the foundation had to put off the next staging of the concert, which was expected in January 2020, because of issues securing a venue.

The artiste said he had been contemplating the National Arena as a suitable venue, but will continue to have discussions with his team about raising funds for the hospital.

“Bustamante is like a bucket with about 500 holes. No matter how you full it, it is not going to full,” he said.