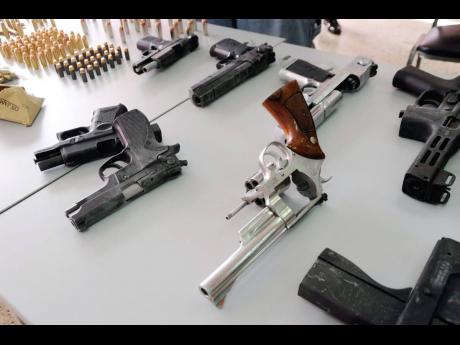 The top American diplomat in Jamaica has questioned why local authorities have not been able to stem the flow of illegal guns coming into the island.

At the same time, United States (US) ambassador to Jamaica, Donald Tapia, has disclosed that authorities in the US are getting ready to ramp up scrutiny of cargo containers, one of the main channels used by criminal networks to supply their cronies here with guns and ammunition.

Since the start of the year, a total of 1,133 persons have been murdered across the island, including 62 in the past two weeks, according to the latest Jamaica Constabulary Force (JCF) Serious and Violent Crime Review.

A firearm was used in 942, or 83 per cent, of those killings, the JCF statistics revealed.

Up to 2016, the US Bureau of Alcohol, Tobacco, Firearms and Explosives conducted traces on 1,509 illegal guns seized on the streets of Jamaica and found that nearly 65 per cent were either manufactured in the US or legally imported there.

But Tapia appeared to bristle at questions about what American authorities were doing to staunch gunrunning from US ports.

“When people ask why are we not stopping it, I say, ‘Why aren’t you stopping it?’, because it should be caught somewhere,” Tapia said during an exclusive interview with The Gleaner.

“The crime is affecting your own people, and when I see 1,600 murders a year, that’s five a day, no matter how you look at it. People get killed uselessly by guns … . It is something that weighs on my mind.”

He continued: “There are four million tourists coming here annually, but my fear is not primarily for them, it is for the Jamaicans living here.”

Jamaica reportedly has about 145 unofficial ports of entry.

Tapia announced that American law-enforcement authorities are now training more dogs to sniff out guns and ammunition on cargo containers.

The US ambassador did not provide details, but acknowledged that there were not enough customs agents to “search every container bound for Jamaica”.

“It is virtually impossible to know what’s inside all containers, but [the] avenue of help in the near future is with increased use of sniffer dogs to help check what is leaving and entering at both ends,” he said.

US port officials told The Gleaner earlier this year that fewer than one per cent of the roughly 357,000 containers that left Port Miami last year were fully examined. Ten per cent, or 35,700 containers, underwent X-ray analysis, while the doors to most of the others were opened, and their contents glanced over before they were sent on their way.

Tapia admitted that, in the main, guns that end up in Jamaica were purchased in the US and Canada by criminal organisations, but insisted that they “don’t come directly from the US”.

“The guns are transported to places like Haiti and the Dominican Republic and then trans-shipped in smaller parts out to Jamaica, which is used like a through station,” he said in apparent reference to the guns-for-drugs trade between Haiti and Jamaica.

The American diplomat said that during a visit to the ATF, he also questioned what was being done to close the gun pipeline between Jamaica and the US.

He said that was when he learnt how gunrunners dismantle weapons and distribute parts to different locations.

“Corruption exists in all the affected countries, from the persons loading it on to the ship, to the ones who turn a blind eye when it reaches its destination. Corruption plays a big role,” he said.