BOJ can track US$ sales to end-users – source 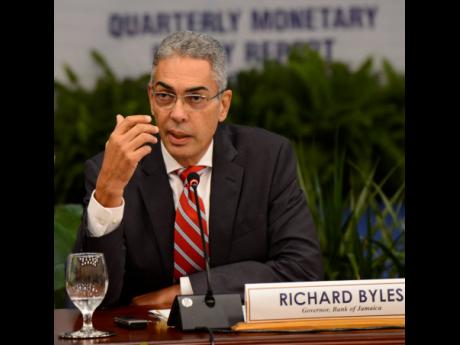 Ian Allen
Richard Byles, governor of the Bank of Jamaica.

The Bank of Jamaica can track greenback sales to ensure obedience of its stipulation that the US$70 million it used to intervene in the foreign exchange market so far this week be transacted with end-users or non-financial commercial entities that are funding obligations for goods and services, The Gleaner understands.

The central bank said it has become necessary to reinstate that requirement as the larger part of BOJ interventions over the past two days has not been reaching end-users because of the unusually large demand to finance foreign-currency investments.

The BOJ intervened in the forex market yesterday with an offer of US$20 million to be sold to authorised dealers and large cambios by means of its Foreign Exchange Intervention and Trading Tool (B-FXITT).

That followed two consecutive days of intervention of a total of US$70 million with the intention of addressing temporary demand and supply imbalances in the market.

“For today’s (Thursday’s) intervention, BOJ will require that authorised dealers and large cambios resell all the funds to end-users. End-user is defined as non-financial commercial entities that are funding obligations for goods and services acquired,” the central bank said in a statement.

“This requirement is not new and actually existed prior to December 2014,” the central bank added.

Officials at the Jamaica Bankers Association, including at its secretariat, as well as BOJ Governor Richard Byles and other senior officials, could not be reached for comment yesterday evening.

However, a source at the BOJ explained that the central bank requires authorised dealers and cambios to sell to their customers, that is, those people doing normal day-to-day business who need foreign exchange to pay bills and do other regular transactions and not for the banks’ business purposes.

The source said that the BOJ could track sales of hard currency to end-users.

“We are the regulators. We have access to their books and their holdings, so, yes, theoretically speaking, we can’t pinpoint an exact US note and say, ‘That was sold yesterday’, but we know what are their holdings in US and Jamaica dollars,” the insider told The Gleaner.

He said that if a bank has, say, US$100 million today on its books, and the BOJ sells it US$10 million with instructions to resell, and the central bank notices that the next day, the bank has US$110 million, “We will know that the banker did not sell it,” the source explained.

“In the old days of intervention, that was the rule – that when we intervene, it was automatically to go to end-users. However, because it was hard to monitor on a long-term ongoing basis and wasn’t always necessary, we kind of cut that out.

“But in this particular instance, because of the pressure on the market by players in the finance industry doing their own business to the detriment of the regular day-to-day users, dealers and cambios are reminded of the stipulation because a lot of the unusual activity in the market has been by financial-sector players,” he added.