Don’t be nervous about China, Shaw coaxes US 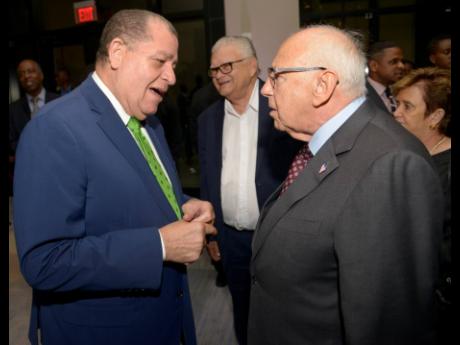 Shorn Hector
Minister of Industry, Commerce, Agriculture and Fisheries Audley Shaw (left) speaks with newly appointed US ambassador to Jamaica, Donald Tapia, at a reception held at the AC Hotel in Kingston on Wednesday October 23.

Cabinet minister Audley Shaw has rapped Washington for bristling at Kingston’s deepening ties with Beijing, suggesting that the “nervous” White House was hypocritical in discouraging investment and commercial ties when China was its biggest trading partner.

Seeking to defuse tensions between the two global powers, Shaw, Jamaica’s industry, commerce, agriculture and fisheries minister, argued that a recent trade mission led by Prime Minister Andrew Holness was solely aimed at boosting exports with China and urged that it not be construed as the subplot of a larger political and ideological divide.

Tensions have flared between the Chinese and American embassies in recent weeks, with diplomats trading barbs over the heads of the Holness administration, which has, till now, remained quiet amid the crossfire.

Speaking at the All-Island Chambers of Commerce luncheon at the Falmouth Cruise Port in Trelawny last Saturday, Shaw said that the misgivings expressed by the US, particularly during the trade mission to China, were unfounded, as the trip was geared towards boosting exports to the Asian nation.

“The Americans seem nervous at the fact that we are close with China. But we can’t understand their nervousness. I met with the ambassador yesterday and I explained to him very carefully – a very nice man, by the way – and I think that there are some amounts of misunderstandings that the Americans might have about our relationship with China,” said Shaw, who had accompanied Holness on his trip.

With a population of 1.4 billion, Shaw said, China offered a market with a huge appetite for Jamaica’s farm produce. He noted as well that China’s economy was growing at an average rate of eight per cent per annum, but it has a per capita income of US$10,000, which is double Jamaica’s.

Jamaica’s imports from China topped US$360 million, up to 2017, while exports to the Asian nation have been at a dribble of less than US$20 million.

“So targeting them as a market for our coffee, for our rum, for our sauces, for our spices – we have now started selling them live lobsters. And so, my message to our friends to the north, who have always been our friends, our Jamaicans are there, we love their friendship, but I want to remind the Americans, who is the largest trading partner for the United States? China. And guess who the largest trading partner for China is? The United States,” he argued.

Shaw also remarked that while the “big boys” engaged in brisk trade with each other, the time was ripe for small states like Jamaica to get in on the action.

“Nothing wrong with that. This is not about geopolitics, this is about trade and moving from poverty to prosperity,” he quipped, referencing his Jamaica Labour Party’s 2016 election slogan.

The minister’s comments come against the background of a tiff between the United States and China, triggered when Admiral Craig Fuller of the US Southern Command expressed chagrin about Jamaica’s warming relations with China, citing Beijing’s campaign of “disinformation”.

The Chinese Embassy in Jamaica had retorted that it would “not be stopped by any force” and accused the army man of making “irresponsible accusations”.

US Ambassador Donald Tapia has also described China’s investments in Jamaica as predatory and dangerous, citing the Xi Jinping administration as a “dragon with two heads” that had a history of expropriating the ports and minerals of other countries for selfish intent.

Shaw’s comments were the first from any member of the Jamaican Government in relation to the impasse, as Foreign Affairs Minister Senator Kamina Johnson Smith had shied away from speaking on the matter, even under prodding from her opposition colleagues in the Upper House last Friday.