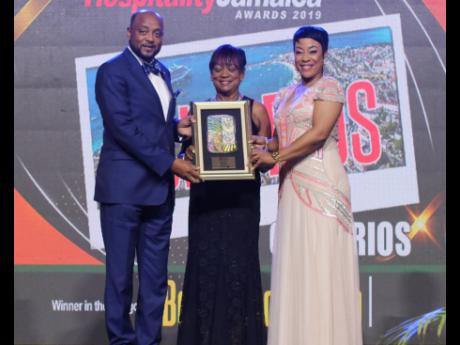 The prestigious hospitality awards have left Michael Belnavis, mayor of St. Ann’s Bay, basking in the glory of the work carried out by the St. Ann Municipal Corporation, supported by the Tourism Enhancement Fund (TEF) and the Tourism Product Development Company.

On the night, Ocho Rios came away with the RJRGLEANER Communications Group’s Hospitality Jamaica award as Jamaica’s Best Resort Town, having outperformed the town of Negril in Westmoreland and the hidden Treasures of Treasure Beach in St. Elizabeth as the two other finalists in this category.

“It’s a real honour for Ocho Rios, ‘the entertainment capital’, to have won the RJRGLEANER Hospitality Jamaica’s Best Resort Town award, because we have done so much to really get the town into shape. It is one of the least crime plagued towns in Jamaica today,” Belnavis said, after collecting the award from Nicole Cunningham, COPA Airlines Commercial Coordinator.

He said that the relocation of vendors from the streets has led to a reduction of congestion in the centre of the resort.

“We have relocated all the vendors and they are happy, which has since reduced the traffic congestions. Ocho Rios is one of the few towns that do not have overcrowding of vendors because we have taken charge of that,” said Belnavis, who is also the chairman of the St. Ann Municipal Corporation.

“The town is remarkably clean. We have gotten the support of the (National) Solid Waste Management Authority, which helped to keep the place clean. We have also received assistance from the TEF with a lot of infrastructural changes, landscaping and directional signage,” he added.

The Blue House Boutique Bed and Breakfast Hotel located on the border of St. Ann and St. Mary won the award for Jamaica’s Best Kept Secret over Jakes Treasure Beach in St. Elizabeth.

That award was quickly followed by Jamaica’s Most Eco/Sustainable Resort, won by Jamaica Inn, based in Ocho Rios, who lost co-owner Peter Morrow, just over a week ago in a plane crash in the United States.

Tourism stakeholders paid tribute to him by observing a minute of silence before his Jamaica Inn hotel was declared the winner. RIU Ocho Rios received a special award for its investment in tourism.