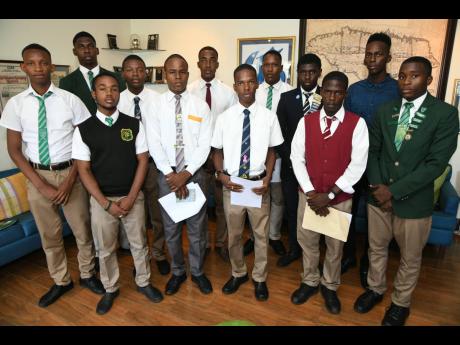 Rudolph Brown/Photographer
Participants in The Gleaner's youth forum pose for a group photo ahead of their discussion on men's issues on Friday, October 18.

There was a general consensus among a group of male students at a recent Gleaner forum that mentorship could make boys better in 2030, and its practical approach foster guidance at different life stages.

The young men, who are all students at varied levels, pitched proposals to better position the male population during a recent youth forum at The Gleaner’s North Street headquarters in Kingston.

Kuwayne Campbell, a first-year student at The University of the West Indies, Mona, said most males prefer to have someone they can relate to when discussing certain topics.

“They prefer to hear from a man that is at a certain stage of his life, because most males are not really into mentoring or expressing themselves because society has this imagery which says male should not express themselves or talk about how they feel. They should just keep it to themselves, which is not true, because all of us are human beings,” Campbell said.

Jamaica College sixth-former Fabian Morris encouraged his peers to look within before they look outside.

“ ... We must ensure that we are being examples, and through being examples, that is how we will gain people, gain followers, disciples and persons so that we can sow seeds of positivity,” he said.

His assertion triggered a discussion on whether the society fully understands males, especially young boys.

“I believe that a strong emphasis should be placed on this,” Joseph McLean of Glenmuir High chimed in as he extolled the virtues of mentorship.

He expressed full agreement that effective mentorship strategies be found to help young men grow positively, adding that he would like to see more mentorship programmes led by male leaders in schools.

“Less emphasis should be placed on telling guys that, ‘Hey, life is not all about sex. Life is not all about pleasure and enjoyment’,” McLean added. “Only in a religious setting and only those who are born in Christian homes are part of these principles on an everyday basis.”

McLean said he was brought up in a Christian home and has seen the benefits of this.

“I have to avoid these stuff because I have bigger plans ahead of me. Idling by and spending moments with other people and doing this will not take you anywhere, and only a few males are aware of this, and I believe that sensitive topics like this should be taught in school at an early age,” he said.

“Many of us, from baby stage, there is someone who we look to to emulate. None of us was born and started to do our own thing, so I believe males have persons from a tender age who they emulate; they want to be like these persons,” he said.

“Music is a way where our youths communicate and understand how to grow. We grow through music, in a sense. A solution is that we use these musicians or persons to transform males from going into a negative direction into a positive direction,” Miller added.