Children urge parliamentarians to protect them 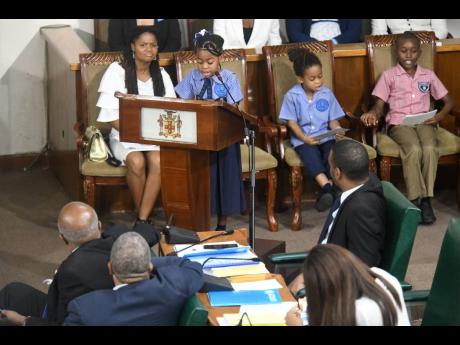 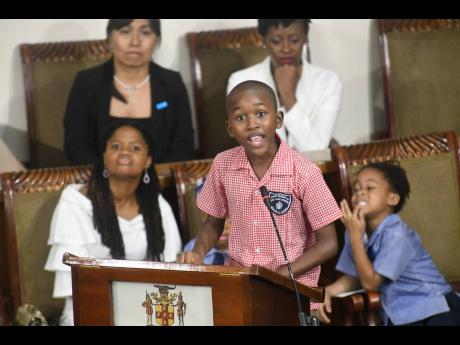 Rudolph Brown/Photographer
Keino King makes his plea to parliamentarians for greater protection for the nation’s children during yesterday’s sitting. 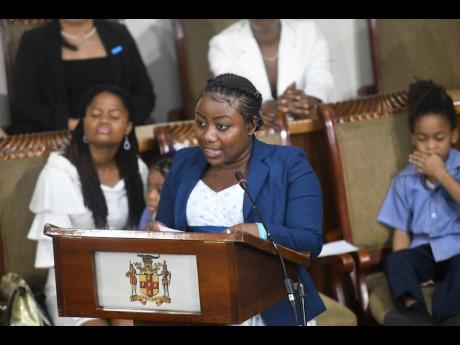 Rudolph Brown/Photographer
Shaneille Hall relates her story of abuse at the hands of her grandfather as she urged lawmakers to take greater steps to protect the nation’s children yesterday. 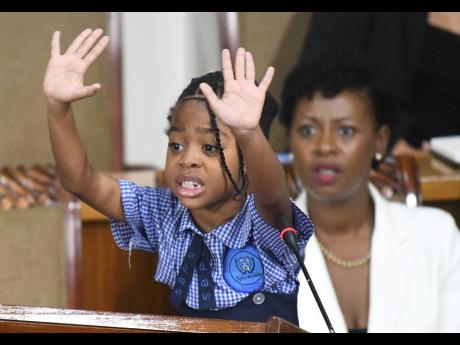 Children of the nation took desperate pleas right where it mattered yesterday, telling parliamentarians to implement tough measures that will punish those who set out to hurt them at their greatest vulnerability.

It was the first time in Jamaica’s history that children were addressing a sitting of the House of Parliament in a special session focused on violence against children.

Their presentations came on the eve of World Children’s Day and the 30th anniversary of the Convention on the Rights of Children.

“We are here today as advocates for a violence-free Jamaica. We love our country but we hate the violence that is hurting the bodies, minds and spirits of Jamaican children,” declared seven-year-old Ngozi Wright, who led the plea on behalf of the children, hoping to jolt the collective conscience of the parliamentarians.

She begged the Government to provide greater protection for children from violence and abuse.

A courageous Shaneille Hall, the eldest of the four presenters, shared her story of how she was first sexually abused by her grandfather when she was five years old – an act which continued until she was nine.

Hall had lost both parents when she was three and was placed in the care of her grandparents.

“I was taken advantage of by the person who should have loved me and protected me the most,” the 18-year-old said.

She explained that she would often be asked by a family member if she was being touched by her grandfather and would say no – not out of fear but because she lacked knowledge about “good touch and bad touch”.

She said she was left with a feeling of hopelessness and even tried to take her life on several occasions.

Hall would break the silence to the relative when she was 10 years old, who then disclosed that she, too, had been a victim.

She would relive the trauma each time she had to face the perpetrator in court.

“I share my story here today for every girl or boy in Jamaica who is subjected to sexual violence. And they are everywhere – there are children who are keeping horrible secrets in upper St Andrew, in downtown Kingston, and all across rural Jamaica,” she said, adding that she knows that these children are in pain.

Hall revealed that during meetings organised by UNICEF and the Office of the Children’s Advocate over a three-month period, children made two main demands – for the implementation of a national anti-bullying campaign and the setting up of a 24-hour counselling helpline for children.

Also among the recommendations was parenting education to reduce violence and stricter enforcement of laws for those who abuse children.

Responding to the presentations, Prime Minister Andrew Holness announced that a newly updated national plan of action to end violence against children would be launched later yesterday evening.

“The successful implementation of the plan is a critical element of this. This is not a plan that will sit on the shelf somewhere. It is a plan that must be implemented in a timely and efficient manner. It must be actioned urgently,” he said.

Opposition Leader Dr Peter Phillips suggested the information gathered during the meetings with children be examined by the Human Resource Committee of Parliament, “so that collectively, we can take the vital decisions that are necessary and not have this experience, which has been so valuable to all of us, simply disappear”.

Police statistics up to November 4 show an increase in the number of children murdered in Jamaica this year, with 40 being killed, up from 38 for the same period in 2018.