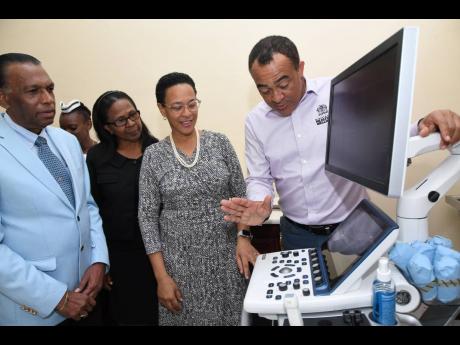 More than a week after a war of words and wills between a doctor and a politician at the Bustamante Hospital for Children stoked public outrage and empathy, the Government has announced that it will be expanding its compassionate care programme to improve service quality at medical facilities.

Minister of Health and Wellness Dr Christopher Tufton said that $100 million, initially, will be pumped into the roll-out of the programme across Accident and Emergency (A&E) departments in 18 hospitals across the island.

The compassionate care programme has already been launched in six facilities, including the Black River and Victoria Jubilee hospitals in 2018.

The decision was revealed following a meeting with the executive of the Jamaica Medical Doctors’ Association yesterday, who have expressed concerns about verbal and physical attacks on front-line staff by angry patients.

“Components of that programme include customer-service training. It also includes enhancing the quality of wait – so the aesthetics of the wait environment, more comfort in terms of seating, and bathroom access,” Tufton told The Gleaner yesterday.

He continued: “We will look at the training components so that not only does all the front-line staff get the training, but that we place greater focus on some of the components of the training, issues like de-escalating tensions, which are a common occurrence in the context of accident and emergency.”

Though Tufton said the programme expansion had been in incubation, he admitted that the Bustamante powwow had caused the ministry to fast-track its plans.

“There is an appreciation of the anxiety about people who are ill and the vulnerabilities in those situations,” the minister said of confrontations that often occur.

He told The Gleaner that the digitisation of registration and the extension of opening hours at primary healthcare facilities were geared at improving wait times.

The Government will also be ramping up security at hospitals and health centres as the ministry is in the final stages of formalising arrangements with five firms in a contract worth $1.7 billion. While acknowledging that this includes a review of security protocols, Tufton declined to go into details on that score.

He said that police responsiveness to flash points is also under scrutiny, particularly after the A&E department of the Bustamante Hospital for Children was shut down for several hours amid an expletive-laden outburst by People’s National Party Councillor Kari Douglas, who got into a near-brawl with Dr Judith Francis Bogle.

Douglas took her eight-month-old son to Bustamante because he was reportedly roasting with fever but was told, after an initial assessment, that his case was not deemed an emergency. She barged into Francis Bogle’s office and braced the door closed before swearing repeatedly in protest.

The councillor has apologised for her action but has accused the doctor of lacking compassion and pushing her out of the way, causing a struggle to develop.

The Ministry of Health and Wellness will also be on a drive to increase public education on triage – the process of assessing and treating patients on the basis of priority.

“It is not a first-come, first-serve basis. It is a function of emergency versus non-emergency cases,” the minister said. “Sometimes people confuse early arrival with priority to be seen, and that is not always the case.”