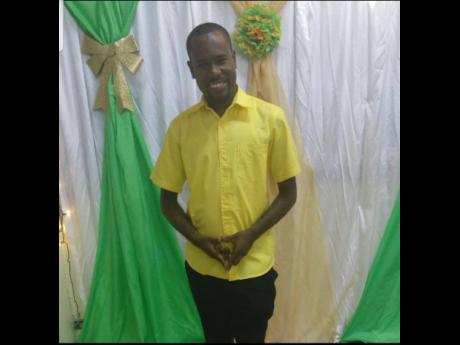 Frome Technical High School in Westmoreland and the Maroon Town community of St James were both plunged into mourning on Tuesday following the tragic death of a teacher in a St Elizabeth automobile crash.

Dead is 32-year-old Wyarth Vaughn Wilkins, of Vaughansfield district, who was employed at Frome Technical High as an auto mechanic and industrial arts teacher.

Wilkins’ death has left his mother, Patricia Wilkins, badly shaken, as she saw him as a model child.

“There are no words to explain how we feel at this time, but we all know that death must come, and God knows best, so we cannot give up hope,” said Wilkins in an interview with The Gleaner yesterday afternoon.

“My son was someone to talk about. He was kind, gentle, loving and was a Christian who served him God, and nobody don’t love old people like him. Is like him was living for both the old and the young, but mi seh, him show special attention to him elders,” added the 74-year-old.

According to the grieving mother, her son, who was popularly called ‘Don’, had a very special relationship with his father, who is a minister of religion.

“Him follow on the path of the Lord and there was nobody as caring as him. Him call me and him father every morning and every evening when him don’t come home just to ensure that we were OK,” Wilkins’ mother said.

Although Wilkins taught at Frome Technical, he was pursuing studies at HEART Trust/NTA in Mandeville, Manchester. He was on his way to that institution when the accident occurred.

According to police reports, shortly after 4 p.m., Wilkins was driving his motor car from Westmoreland towards Manchester when on reaching a section of the Content main road in Lacovia, St Elizabeth, the vehicle was involved in a three-vehicle collision. He suffered multiple injuries and later died in the hospital.

Everton Riley, who led a team from the Ministry of Education’s Region Four, which visited Frome Technical yesterday, described Wilkins’ death as a blow to the entire school family.

And Dorset Taylor, a vice-principal of Frome Technical, described Wilkins as a courteous young man who had made an indelible mark on the school.

“Wilkins was a people person. He was kind to each and everyone at the school, and he got along with everyone very well,” said Taylor. “When I turned the pages of the school register earlier today, and see where he is supposed to sign left blank, it really hit me that this loving person will not be around anymore. “