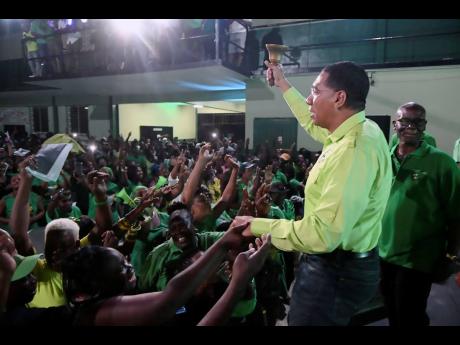 For the second consecutive year, Jamaica Labour Party (JLP) leader Andrew Holness will face party faithful at an annual conference after losing a Cabinet minister under a cloud of corruption.

Holness, who is also the prime minister, lost Ruel Reid, his education and information minister, in March this year, following allegations of irregularities and financial impropriety at the Ministry of Education and its related agencies.

The JLP leader has said little to date on the Reid affair, which is the latest blow to the Government he leads, especially after his commitment to anti-corruption efforts at his 2016 swearing-in.

However, he admitted to Labourites during a party meeting that he was “saddened” by the stains on the party, and last week at a closed-door meeting in St Ann he spoke to the issue of corruption, warning the party’s representatives.

Reid was arrested early last month, along with head of the Caribbean Maritime University (CMU) Professor Fritz Pinnock, following a raid in October conducted by the Major Organised Crime and Anti-Corruption Agency (MOCA), Financial Investigations Division (FID) and the Constabulary Financial Unit of the Counter-Terrorism and Organised Crime Division (CTOC). His wife and daughter, and a JLP councillor were also arrested in the early-morning raids.

A Holness insider said last week that the JLP remains the best choice to lead Jamaica at this time, and the “prime minister will outline plans to build Jamaica to make it clear that the opposition (People’s National Party) is incapable”.

Party Chairman Robert Montague said the conference will be a “big deal”.

“Our 76th annual conference is going to be a big deal. This conference will see us engaging our base, hearing from them as we look to begin the long process of reviewing new and innovative policy ideas,” said Montague in prepared responses to The Sunday Gleaner.

“We will be assessing our performance as a party in government, and checking to ensure that in our fourth year, we begin the process of candidate assessment and selection,” Montague also said.

It is not known how many seats are yet to have a representative named by the JLP, but seats considered strongly in favour of the opposition are usually filled closer to the declaration of elections. It is also not known if the ailing Shahine Robinson, MP for St Ann North East, will contest the next election constitutionally due in 2021, but widely expected to be next year.

Sunday Gleaner sources say the prime minister has sought to nudge some long-standing members of parliament away from representation, but there has been resistance to the efforts.

One sitting member of parliament is said to have chased a Holness supporter from a constituency this year, after it was made clear that permission was being sought to ‘understudy’ him. The MP is one of several “multiple-term” representatives the party is seeking to replace.

“We will use the conference to seek feedback, to see if we can adjust, where necessary, our programmes and policies to ensure that the gains we have already achieved keep delivering the prosperity that Jamaica deserves,” said the chairman.

He said the conference will also report on the assessment of manifesto promises, highlight achievements and review of caretakers.

Holness will be boasting success at the Government’s infrastructural development programme in sections of the city, despite the missed deadlines for works in the Corporate Area. Heavy islandwide rainfall in 2019 has also impacted completion dates. He can also celebrate record low unemployment levels and a relatively stable macroeconomic environment which has resulted in the reduction of the debt-to-GDP ratio.

But there is no escape from the stench of corruption hanging over the head of the Government led by the post-Independence-born prime minister.

The prime minister will also have to help raise trust in the Government and address crime, largely subdued by zones of special operations and localised states of emergency.