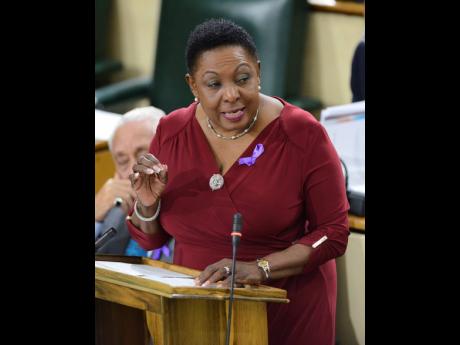 As the Government moves to pass more stringent legislation to punish the perpetrators of sexual and other forms of violence against women, Gender Affairs Minister Olivia Grange is urging Jamaicans to join the movement to end such attacks.

Citing the Women’s Health Survey, Grange said it revealed that one in every four women in Jamaica has either been slapped, beaten with fists, pushed, kicked, attacked with a weapon or threatened with a weapon by her male partner.

The study was designed to collect information on women’s health and their experiences of violence in Jamaica.

According to Grange, the survey also showed that a quarter of women in Jamaica have been sexually abused by men who are not their intimate partners and that the majority of men who sexually abused women were friends or acquaintances.

Additionally, the survey highlighted that one in every five women reported being sexually abused before reaching 18 years old and that the persons who commited the abuse were mainly family members or friends.

On Monday, Jamaica joined the rest of the world in commemorating the International Day for the Elimination of Violence Against Women.

“We empathise and we feel upset when heartless, callous, horriﬁc, and brutal attacks are committed against women and girls everywhere. However, we can help every woman who is suffering and help to prevent it from happening again,” Grange told her parliamentary colleagues yesterday in Gordon House.

The theme for this year’s commemoration is ‘Stand Up! Talk Up! Gender-Based Violence is not a Private Matter’.

She related a story of a woman in rural Jamaica who was suffering domestic abuse for some time and was willing to “tough it out for the sake of her children while hoping that he would change”.

However, Grange said that the abuse got more severe and that when she was contacted by the abused woman, urgent steps were made to relocate her and her children.

“The children are doing well at their new school. She is getting ready to relaunch her career, and the violence and despair that they knew has been replaced with peace and hope,” Grange said.

“That woman and her children represent one of several whom have dealt with in the last year. We have moved several women and children out of violent situations and are helping them to rebuild their lives.”

She reported that the Government has purchased one shelter and was currently “making it fit and ready” for women and children who suffer abuse from their partners.

The minister said that two other locations have been identified in “the east and the west” to establish shelters.

She said that Cabinet had signed off on the purchase of the additional two centres.

The Government had made a series of commitments in the last two years about completing the first shelter.