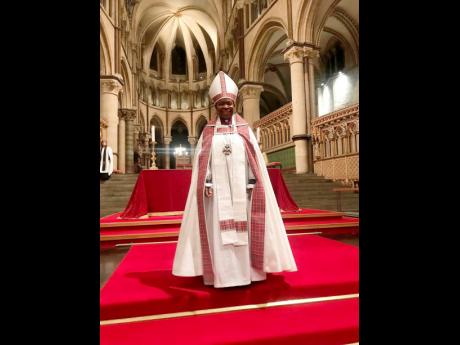 Jah is My Keeper, a composition by Jamaican reggae icon Peter Tosh, resonated mystically within the ancient walls of the celebrated Canterbury Cathedral in England yesterday afternoon, during the service of installation for Jamaica-born Rose Hudson-Wilkin, the new Bishop of Dover.

“Jah is indeed my keeper, and those words will sustain me,” the newly enthroned bishop told The Sunday Gleaner after the service.

“And I think Peter Tosh would be surprised with great joy if he were alive to hear the choir of Canterbury Cathedral performing his composition so beautifully,” she added.

Tosh died in 1987 and one of his hit songs, ironically, is Buckingham Palace, where he chants about smoking marijuana in the residence of the Queen who is the titular head of the Church of England. Hudson-Wilkin was previously chaplain to the Queen.

During the 3:15 p.m. choral evensong installation at the Canterbury Cathedral, the seat of the Archbishop of Canterbury, the leader of the Anglican Church worldwide, the Tosh composition was performed by the renowned church choir while the congregation remained seated. Jah is My Keeper is based on Psalm 27, and the increasingly popular hymn is arranged by Jamaican organist and Kingston College and St Andrew Parish Church choir master Audley Davidson. The song is listed as #229 in the CPWI hymnal, now widely used in Anglican churches across Jamaica and the Caribbean, with inclusions from Caribbean composers such as Ernie Smith, Noel Dexter and Barry Chevannes.

Yesterday’s grand enthronement of Bishop Hudson-Wilkin represented the final stage in a process that has been used for centuries. Hudson-Wilkin created history on November 19 at her ordination and consecration at St Paul’s Cathedral in London when she became the first black female bishop in the Church of England. At 58, she is now one of the youngest bishops in the Church of England, and she performs her first duty later today with the ordination of a new priest.

Several bus charters from various churches in London and elsewhere journeyed to Canterbury to witness the installation of the tremendously popular Montego Bay native, who told The Gleaner on the day of her ordination that she had every intention to explore the new church music that was coming out of Jamaica and the Caribbean.

“I think I can speak for all Jamaicans to say we are bursting with pride for the blessings bestowed upon Bishop Hudson-Wilkin, and we wish for her God’s richest blessing as she begins her ministry as Bishop of Dover,” Perrin told The Sunday Gleaner.

The Canterbury Cathedral, also known as the Cathedral and Metropolitical Church of Christ at Canterbury, was founded in the year 597. It is designated a World Heritage Site and it is one of the oldest and most visited churches in England. It requires £18,000 per day for its operation, and it houses the shrine to Thomas Becket, Archbishop of Canterbury, who was murdered in the cathedral just after Christmas in 1170 by knights of King Henry II, with whom the king had a contentious relationship. The incident became fodder for the T.S. Elliot classic drama Murder in the Cathedral. In retribution, King Henry II was also murdered in the same cathedral when he visited to make peace with the congregation.