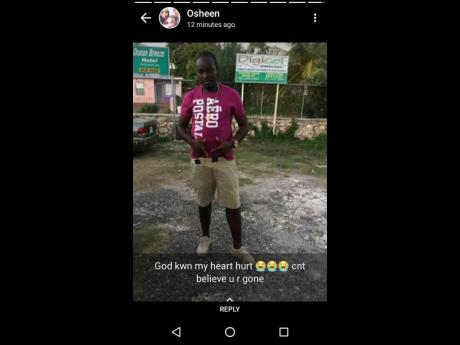 Photo by Hopeton Bucknor
Leonard Mais, 32, the cookshop operator who was gunned down outside his business place in Spot Valley, St James, on the weekend.

Despite the Government’s defence of its states of emergency (SOEs) as a success and vowing to expand its security crackdowns, five Jamaicans are murdered every day, with 36 homicides being recorded over the last week according to data from the police force.

But while the police and military have fanned out across western and central Jamaica, urban hotspots in Kingston, St Andrew, and St Catherine are experiencing a significant rise in serious and violent crimes.

A review of the crime stats shows that there has been a surge in murders, shootings, and rapes in six, or 75 per cent of metro police divisions. There has also been an uptick in robberies in five of the eight divisions.

While the security forces have clamped down on violent crime in the Kingston Western Police Division – with homicides dipping by almost 19 per cent – East and Central Kingston have seen significant increases. Murders in Central Kingston have risen 133 per cent, from 15 in 2018 to 35 this year, while shootings have rocketed by almost 64 per cent.

In East Kingston, murders have climbed by more than 21 per cent and shootings by 50 per cent. Another major worry for the division is that three times the number of women have been raped this year compared to the corresponding period for 2018.

Rapes have also increased in St Andrew Central by 100 per cent.

Across the board, there is an upward trend in murders in 10 of 19 police divisions, while rape has risen in nine.

Data show that since the start of the year, on average, every time the trigger is pulled in St Andrew South, someone is killed. As at Saturday, the division recorded 158 murders from 158 shootings. A barber was the latest person to have been killed in that division last Friday.

Meanwhile, four persons, including two shop operators and a fruit vendor, were shot and killed in St James on the weekend. The parish, along with Hanover and Westmoreland, has been under a state of emergency since April 30.

Those killed have been identified as 18-year-old Kodie Buckingham, a shopkeeper of Flower Hill in Salt Spring; Leonard Mais, 32, a cookshop operator of Spot Valley district; Jason Reid, 26, a fruit vendor, also of Spot Valley; and an unidentified male believed to be in his 30s.

Georgette Hastings, aunt of the slain cookshop operator, told The Gleaner that her nephew was dear to her.

“Kenroy was one of the nicest persons alive. Him only live to tek care of him family,” said Hastings, using Mais’ nickname.

The weekend bloodletting in the parish started on Friday in Lilliput, where residents stumbled upon the body of an unidentified male with multiple chop wounds to the neck and hand.

People’s National Party Spokesman on National Security Fitz Jackson has criticised what he believes is the overuse of SOEs, which have nullified their “shock-and-awe effect”.

“What more evidence does the Government need to be convinced that their SOE crime-fighting policy is only worsening the country’s crime situation, and that there is urgent need for change?” Jackson asked.

Despite criticism of the SOEs, the Opposition has voted in support for three that are in effect covering six parishes and seven police divisions.