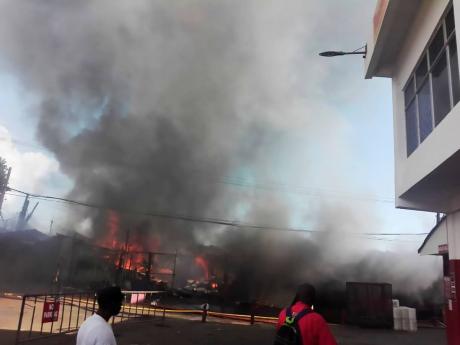 Photo by Olivia Brown
A man looks on as May Pen Market goes up in flames yesterday afternoon.

With tears streaming down her face, a woman who gave her name as Miss Patsy looked on in distress as the May Pen Market was transformed into a furnace just over three weeks before Christmas.

As the devastation sank in, the 72-year-old hat vendor, who has been selling wares for more than 40 years, saw her stock and holiday profit turn to glowing embers.

She was not alone. Dozens of others whose livelihoods were interwoven with market life were gutted as they looked on helplessly as a roaring fire engulfed the Sevens Road facility yesterday afternoon, its appetite unchecked.

Sharing in the grief and loss was Olivene Olive of Harris Street in the parish.

“A church mi deh and get di call. At firs’, mi ask Pastor fi pray fi mi, and a dis news mi get. Mi cyaa manage. A dat mi have fi help miself. Everyting mi have, a out it mi get it,” she said, referring to her stall, which was in flames.

Another vendor, Doreen McKenzie, who has been operating in the market for 16 years, said she lost all her merchandise in the fire.

Firefighters fought the blaze for more than three hours, but they were no match for the furious flames.

Vendors and residents told The Gleaner that the fire was discovered at the location around 1:30 p.m.

One fire unit tackled the blaze but ran out of water and left the scene. The fire truck returned later with reinforcements from private water truck operators, Juici Patties and Tripple T’s Trucking, which sought to assist the crew in preventing the blaze from destroying the neighbouring May Pen Primary School.

Councillor for the Denbigh division, Joel Williams, said the destruction of the market occurred at the worst possible time, when vendors would seek to tap into the Yuletide shopping season.

“This is a total disaster, and everybody is stocking up for Christmas. The fire is out of control; it is difficult to control, even by the firemen,” said Williams.

Central Clarendon Member of Parliament Mike Henry said he was awaiting an assessment of the damage before making a decision on the way forward. The MP stated that he had already had dialogue with May Pen Mayor Winston Maragh and the Ministry of Local Government and Community Development.

Residents on the scene insisted that the damage could have been contained if the town’s firefighters were better equipped.

“Fire station deh so near, an’ May Pen a bun dung,” one resident bellowed. And another person on the scene said, “Dem yah fire man yah fraid a di fire.”