Truckers under the gun 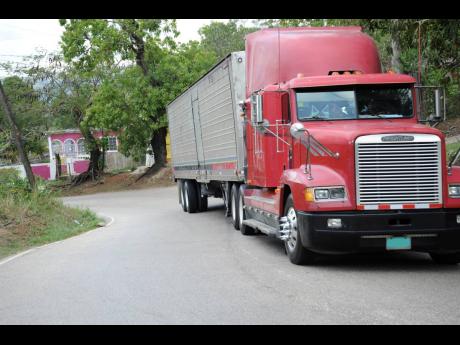 File
Trucks like this one travelling along Mount Rosser have been falling victim to armed robbers.

Truck drivers who distribute goods from Kingston to the north coast are being plagued by armed robbers as they travel along hilly routes in St Ann and St Catherine.

Judith Ann Williams-Sharpe, executive director of the All-Island Truckers Association, told The Sunday Gleaner that heists are occurring daily and the robbers have been employing ingenious methods to relieve the truckers of the goods consigned to them for delivery.

The hoodlums, she said, are heavily armed and not afraid to use their guns.

“When the trucks are driving up Mount Rosser, the thieves hop the truck and use modern equipment to cut off the locks at the back doors and unload the goods when the truck is in motion. The drivers sometimes don’t realise what is going on,” Williams-Sharpe added, in descriptions of real-world tactics that could have been pulled from Hollywood movie scripts.

“There is a crew of them who are heavily armed and are not afraid to shoot at drivers if they do not get their way. They used to carry out the robberies at nights but their hours of operation have expanded and they are now doing it in broad daylight,” she added.

The Mount Rosser route is located in the St Catherine North Police Division and crime officer for that division, Deputy Superintendent Leighton Blackstock, confirmed that the police are aware of the concerns.

“We have received reports of robberies in that area,” Blackstock said.

Oshane Findlay is the owner of a truck and plies that route on a daily basis. He recounted three incidents in which he encountered the band of robbers. Two of those incidents left him holding the bag.

Findlay’s third encounter with the thieves ended with him narrowly escaping injury after he saw them early and sped up.

“A group of men just run out of the bushes attempting to jump on the truck. I saw them early and speed up, and when them see that them couldn’t catch the truck one of them just squeeze off two shot. I stopped up the road and checked but nothing was missing,” he said.

“I know of people whose trucks have been broken into while they were driving. I don’t know what they have but it cut through the thick locks and doors fast. They use modern equipment,” he added.

According to Williams-Sharpe, the crooks have upped the ante along the Chalky Hill to Drax Hall route, which bypasses the Fern Gully in the neighbouring parish of St Ann.

She told The Sunday Gleaner that the men grease the roads and cut down trees in order to disable the heavy vehicles so they can subdue their drivers and empty the holding areas of the vehicles.

“They are even more active between Chalky Hill and Drax Hall. These thugs seem to have information on which truck is carrying what kind of goods as they seem to target those with the goods they want. They are located at different points along the route, so if the driver eludes one set they have to contend with another set further along the route. They sometimes jump on top of the truck from the trees as the truck climbs the hill slowly, and then they get to the driver, hold him at gunpoint and their cronies unload the truck,” she said.

The truckers are complaining that they are at their wits’ end, due to the fact that, despite numerous complaints, the police seem to be indifferent to their plight.

“The Ewarton police are of no help and the Bog Walk police say truckers must go and get them own gun,” Williams-Sharpe said.

Her claim was backed up by Findlay.

“I went to the Ewarton police and them say it look like me involve and them soon start lock up truck man. The station lock up every night and the police give us attitude,” he said.

The truck owners and drivers say their problems are further compounded because the companies they are contracted to distribute for deduct money from their pay if goods are stolen.

“Sometimes the goods stolen is worth more than the value of the trip. The companies say they have adopted that policy because of unscrupulous truckers who are known to have taken part in the stealing of the commodities. So if the drivers get robbed it is the truckers who foot the bill for the loss,” Williams-Sharpe said.

She admitted that some truckers are in fact dishonest, but called for each case to be judged on its merit, and argued that companies should desist from punishing every trucker for the actions of a nefarious few.