Munroe: Ja could slip or stagnate on corruption index - NIA boss says not enough being done to tackle scourge in society 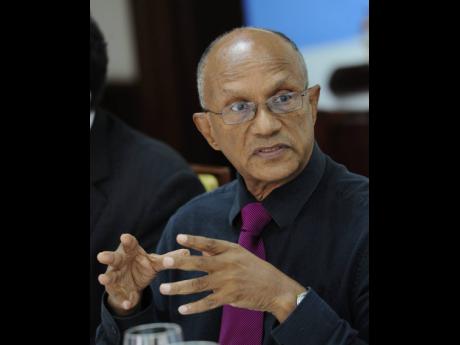 NIA boss Professor Trevor Munroe told The Gleaner yesterday – which was celebrated as International Anti-Corruption Day – that Jamaica’s lethargic approach to fighting corruption would not produce any improvement in the country’s ranking, which stood at 70 in the 2018 report.

The CPI ranks 180 countries and territories by their perceived levels of public-sector corruption, according to experts and business people. It uses a scale of zero to 100, where zero is highly corrupt and 100 is very clean.

“I do not believe that we did ourselves justice and that the authorities were vigorous and timely, and as courageous as they needed to be to apprehend the guilty – those well-connected facilitators in high places – in 2019,” Munroe said.

He said that in 2017, the country improved on the index when legislative measures were passed to tackle corruption, noting that the following year, very little happened and Jamaica slipped on the index. According to the NIA head, 2019 was not a year that the chief corruption oversight body inspired confidence in its ability to carry out its mandate swiftly.

Munroe noted that the Integrity Commission had indicated that it received the Petrojam investigation report in July, but “we have heard absolutely nothing since. That kind of delay without explanation, the lack of transparency is very likely to ensure that we either stand still or slip.”

He said that if Jamaica stopped “treading water” and moved forward in the fight against corruption, the country would likely see an improvement in the 2020 index.

The anti-corruption campaigner observed that the International Monetary Fund (IMF), despite celebrating Jamaica’s success in its financial arrangements with the Fund, warned the country in its May 2019 report that it was lagging behind comparable countries in dealing with corruption.

He added that the IMF also cautioned that if Jamaica did not deal with corruption more effectively, it would prejudice the stabilisation that has been achieved, the economic growth that the country is working towards, and also undermine the rule of law.

Yesterday, United Nations (UN) Secretary General António Guterres urged “people everywhere to continue to work on innovative solutions to win the battle against corruption and to ensure that precious resources serve the peoples of the world”.

Guterres indicated that every year, US$1 trillion is paid in bribes while an estimated US$2.6 trillion are stolen annually through corruption – a sum equivalent to more than five per cent of the global GDP.

The United Nations Development Programme said that in developing countries, funds lost to corruption are estimated at 10 times the amount of official development assistance.

Ja losing $95b each year

Munroe reasoned that the “precious resources” to which the UN secretary general referred applied as much to Jamaica as elsewhere.

“The precious resources that we lose represent six to seven per cent of the country’s gross domestic product, which is approximately $95.6 billion being lost each year as a result of corruption, organised crime, misconduct in the affairs of public boards,” Munroe said.

He prescribed cutting the losses and jailing the corrupt in order to use these valuable resources to bolster the school feeding programme, equip the security forces better, to make hospitals and clinics more efficient and provide improved service to Jamaicans.

“We have seen progress in the number of persons willing to call Crime Stop and provide the authorities with information on things that they know,” he added.