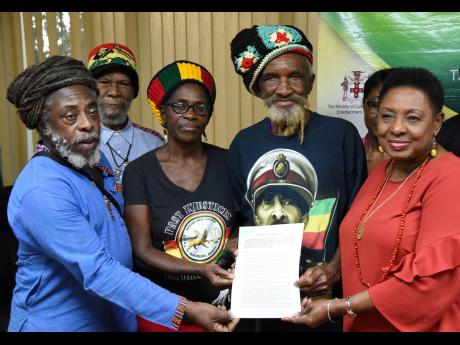 Ian Allen/Photographer
Culture Minister Olivia Grange (right) hands over the copy of the deed for the Coral Gardens Trust Fund to members of the Rastafari Coral Gardens Benevolent Society on Thursday. The members are (from left) Lewis Brown, Edward Fray, Pamella Williams and Isaac Wright. The deed was signed at a ceremony at the culture ministry in New Kingston.

Following yesterday’s commitment of J$12.7 million to establish a trust fund for victims of the 1963 Coral Gardens attacks by the police, members of the Rastafari Coral Gardens Benevolent Society are demanding that the Government deliver on other claims, including farmlands and scholarships.

Minister of Culture, Gender, Entertainment and Sport Olivia Grange announced at a signing ceremony at her New Kingston office yesterday that in addition to the trust fund, land had been identified for the establishment of a golden age home for Rastafarians who were victims of the notorious Coral Gardens Incident.

However, secretary of the benevolent society, Pamella Williams, made it clear that this fell well short of its original 13-point compensation claim. She told The Gleaner that the group plans to press for full redress.

“We are here to witness and participate in the official signing for the establishment of the trust fund, so it really represents a culmination of more than three decades of work from the Rastafari community in terms of public education and advocacy on behalf of the survivors of the Coral Gardens atrocities,” she said.

The Rastafarians are calling for reparations in the form of scholarships at the primary, secondary and tertiary levels, as well as farmlands for sustainable income generation. They also want a monument erected to acknowledge the historical injustice that had its genesis at a service station in Coral Gardens, on the outskirts of Montego Bay, St James, from April 11-13 in 1963. The police raided a Rastafarian camp, killing eight persons and injuring scores.

In her contribution to the Sectoral Debate in Parliament in July 2018, Grange committed to the establishment of at least three annual scholarships as part of the payback, and the society said it is holding the minister to her word.

Fifty-six years after the Coral Gardens Incident, Rastafarians say they want what they are due.

“Those are just some of our requests apart from just cash compensation. ... So that is the package that we will be focusing on after today,” Williams told The Gleaner.

Prime Minister Andrew Holness had apologised, in 2017, on behalf of the Government, which Rastafarians said was a starting point in the process of reconciliation.

“(It) was wrong and should never be repeated,” the prime minister said at the time about the Good Friday attack.