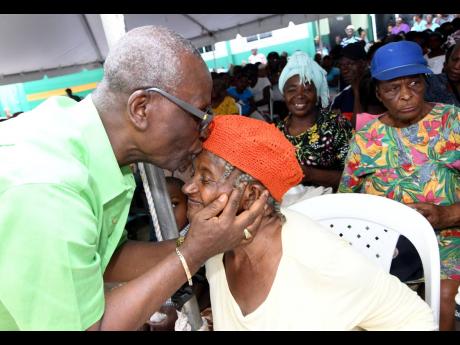 After accepting his Christmas care package from Kingston Western Member of Parliament Desmond McKenzie at Friday’s annual senior citizens’ treat at the Tivoli Gardens Community Centre yesterday, 73-year-old Maurice ‘Chi-Chi Wheel’ Forsythe was quite clear about his plans for the rest of the day.

After returning to Denham Town in the care of his escort, the feisty senior citizen, who is blind and lives on his own, had plans to cook certain items, pack away the others, and then come back out to chill. He was, however, adamant about the food items.

“I don’t want nobody to touch them; I going to cook them myself. Me used to it, man,” he proudly declared.

Forsythe was among the estimated 2,500 persons who turned out for the treat, which was well supported by corporate Jamaica, allowing the organisers to exceed their cash target of J$6 million by at least a one and half million dollars, MP McKenzie disclosed. This was in addition to the generous donations of produce for the care packages, which included rice, flour, red peas, chicken, milk, biscuits, sardine, corned beef, salt fish and soap, among other items.

He was satisfied that there was enough to ensure residents could enjoy a decent Christmas meal, a sentiment shared by Forsythe.

“A big help this, because me never have any money fi buy it. It going to last me a very good time,” he said.

Donations for at least 700 shut-ins were planned for last evening, with a treat for 5,000 children from across the community planned for today.

Yesterday’s treat was well attended, with standing room only, prompting McKenzie to acknowledge that those in attendance were drawn from “every nook and cranny of the corporate Area and even outside the Corporate Area”.

“They have always come to be a part of us and we have never turned back anybody,” he explained.

Even as he was enjoying the time with his constituents, McKenzie made an appeal for a reduction in the level of violence.

“Let us celebrate Christmas to allow it to reflect the true reason why we celebrate it and to look out for those who are in need,” he urged.