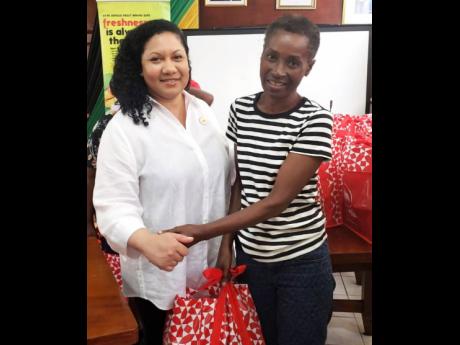 The sombre mood of May Pen vendors whose dreams of a merry Christmas were scorched by a market fire three weeks ago were lifted on Thursday after they were gifted compensation by the Ministry of Labour and Social Security and the Clarendon Municipal Corporation.

Stating that compensation usually took months to be disbursed, Winston Maragh, mayor of May Pen, said he was grateful to members of the Government who came on board to assist the vendors.

“Me haffi give thanks, me feel good. Every mickle mek a muckle,” said Daniel Morrison, a vendor.

Sharing the sentiment of gratitude, Gloria Johnson said: “I am very happy that somebody cares. It’s not even what you get but to know somebody care.”

CEO of the Clarendon Municipal Corporation, Rowhan Blake, said that while the cause of the fire was still unconfirmed, assessments revealed vulnerabilities that officials say they intend to remedy. And vendors have also been urged by parish manager of the Ministry of Labour and Social Security, Warren Green, to insure their property to insulate themselves from major tragedy.

“Going forward, those hazards will be eliminated,” Blake said.

Meanwhile, commercial services manager at the corporation, Nickita Francis, called for fee compliance among vendors. She also announced that new vending spots were to be allocated on Monday, the height of the Christmas shopping season.

Councillor for the Denbigh division, Joel Williams, thanked the prime minister, as well as Clarendon Central Member of Parliament Mike Henry and other stakeholders, for swift action in the recovery process

“On the day (of the fire) when we saw what happened, we thought the Government had to intervene. I am grateful to the stakeholders for the little token,” he added.

The May Pen Market was turned to charred rubble after a massive fire destroyed the infrastructure and possessions on Sunday, December 1.

Municipal authorities bowed to pressure from the vendors after a plan to relocate them to various sections of the parish capital was fiercely rejected. The market was cleaned in time for the resumption of sales on December 13 – but that will be temporary reprieve until a new facility is constructed.

Lorraine Green-Mason, president of the May Pen Vendors Association, said that the speed of the governmental intervention was remarkable.