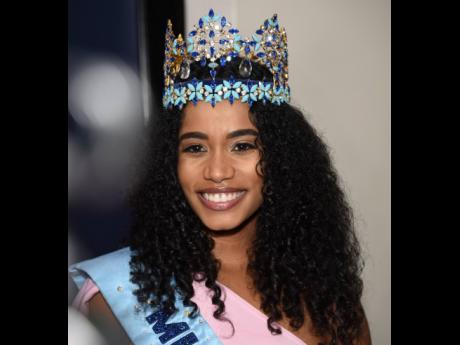 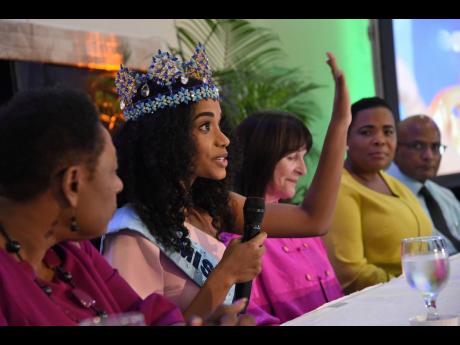 Just hours after launching her charity single, I Have Nothing, yesterday, Miss World 2019 Toni-Ann Singh had already managed to rack up more than 20,000 views on YouTube and was being encouraged by scores of adoring fans worldwide to consider entering upcoming international talent competitions.

The single is aimed at raising funds towards the Miss World Organisation’s charitable arm, Beauty with a Purpose, and, according to the reigning queen, is her gift to the world.

“Every single penny will go to all the projects, all across the world, and all of my sisters and their Beauty with a Purpose projects as well, and I believe that this is something that will last for a very long time,” said Singh during a press conference held yesterday morning at The Jamaica Pegasus hotel in New Kingston.

Despite a busy schedule, Singh said she had to make time to visit the famous Abbey Road Studios in London, England, to record the song “very quickly”.

“I had a wonderful time on stage. I never thought I would get to sing on the Miss World stage, I never thought any of this would happen, but I am so grateful,” she said.

Singh said there will be no charge to access the video, but pleaded for persons to donate to the cause.

Several YouTube viewers hailed Singh as one of the best Miss Worlds to date. The love poured in from all over the world, including Trinidad and Tobago, Sri Lanka, Indonesia, Nepal and Argentina. The general consensus was that “she is amazing”.

During the press conference, Julia Morley, chairman of the Miss World Organisation, described Singh as a precious gem, while commenting on the fact that she won the hearts of many in the competition, including Miss Nigeria Nyekachi Douglas, whose giddy reaction to her friend’s win was one of the highlights of the competition.

“There was some magic in her, the magic in her was that she was true, true to herself, and this is what matters, she was proud to be Jamaican,” Morley told media members gathered for the press conference.

“You all had a hand in making this beautiful young lady, Jamaica itself, mom and dad, and the atmosphere and the kindness that you give to people,” she assured.

Morley said 130 projects are currently being targeted around the world under the Beauty with a Purpose banner, and assured that every penny raised from the Whitney Houston cover will go towards financing these projects.

Donations can be made at: