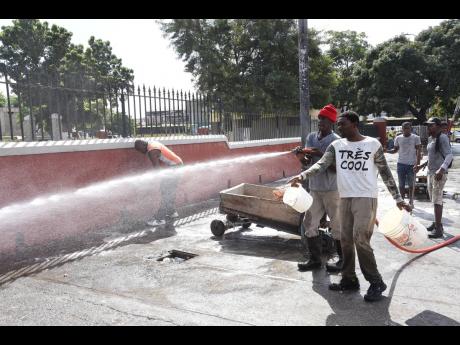 Ian Allen
Workmen wash and sweep around St William Grant Park to rid the area of the stench of urine at the downtown Kingston landmark. 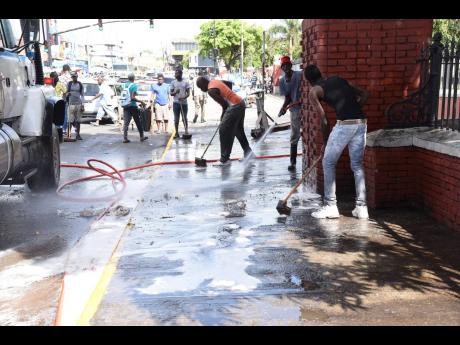 While many Jamaicans are shopping to make their homes more comfortable this Christmas season, workers at the St William Grant Park and its environs in downtown Kingston have been dreading the added discomfort caused by those who use the park premises as toilets.

Mayor of Kingston Delroy Williams was last week unable to say the cost or frequency of the washing of the perimeter fence of the park, but workmen spent much of last Wednesday and Thursday scouring down the urine-stained outskirts of the landmark.

For years, park workers, security guards, shoppers and children have had to endure the stench from sections of the park, which workers said seems to double during the Christmas and back-to-school periods.

Bathroom operators are paid by the Government but users are asked to contribute $50 towards the maintenance of bathroom toiletries.

Some Jamaicans, however, relieve themselves on the park walls, especially behind a string of Jamaica Urban Transit Company (JUTC) buses that are usually parked on the park’s northern perimeter fence.

“It’s not about the money; dem just too damn nasty … nobody not holding any hard and fast on them to use the bathroom,” said one operator, adding that she has been met with expletives from some users when she requests the contribution.

“Not everybody come here and pay. We still let them use it. But some of the man dem want to tell you which part of you big and where on you them want to piss. Man even fly dem ratchet (knife) when you ask them. But most of them prefer to pee-pee on the wall than use the bathroom,” she continued.

On Thursday, passers-by looked on in praise as washing took place. Some pedestrians said they avoid the northern end of the park behind the JUTC buses altogether because of the stench and urine stains on the walls and sidewalks.

At the southern end of the park, the Reverend Father Louis Hurst said he would also be taking precautions to ensure the Kingston Parish Church is not overrun by vendors and shoppers, who are a nuisance during high-shopping periods.

Last September, Hurst bemoaned an influx of back-to-school vendors and shoppers who not only use the churchyard as their toilet but also park their vehicles on the church compound without permission.

For years, church leaders have opted not to host midnight mass due to the high traffic and perceived security risks that usually come with Grand Market festivities in downtown Kingston.

“A lot of people felt that they could not access the church, and another thing is the noise from the Grand Market. So many persons just drifted elsewhere,” he said.