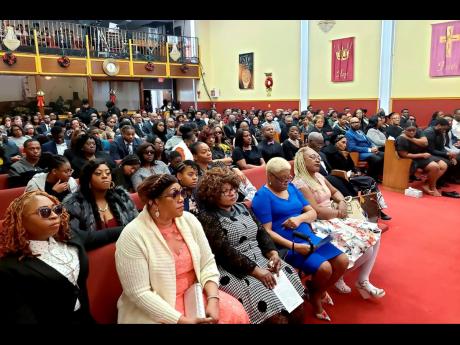 It was standing room only at Faith Gospel Tabernacle in Irvington, New Jersey, yesterday as hundreds of mourners bid farewell to Jamaican celebrity chef Alton Henry, 59, who tantalised the taste buds of thousands of New York tri-state residents over several decades with his exciting brand of Jamaican fusion cuisine.

Henry died suddenly on December 14 after collapsing from a heart attack while catering at an event in Morristown, New Jersey.

The morning send-off, in unusually warm weather, was led by the Rev Dr Heather Francis of Faith Gospel Tabernacle and lasted just over two hours. The tributes were glowing, the colours cheerful and singing sprightly.

Sam Cherringon, treasurer of the Jamaica Organization of New Jersey, read a special resolution in Henry’s honour, lauding the late chef’s service and commitment to the expatriate community.

Other tributes were delivered by his son, Jermaine Fyffe, a former Wolmer’s Boys’ School track athlete, and cousins Hopeton Fyffe and Marline Smith.

Henry’s modest beginnings were in rural Spring Garden, St Thomas, swimming in rivers and riding donkeys. But his real love was the kitchen, and he came to prominence by his creative and meticulous presentation and styling of Jamaican dishes for restaurants, weddings, parties, and family and corporate events. He also brought the joys of Jamaican cuisine into the homes of millions of television viewers and radio listeners in the New York tri-state region by his appearance on several food segments.

Henry was scheduled to travel to Jamaica on Monday for a rare Christmas vacation, and one tribute revealed that in his usual style of early preparation, he had already created menu suggestions for the trip.

“Alton was raised on rural values, and these Spring Garden values helped create his impeccable integrity that was seen in his personal relationships and his business endeavours,” Carlton Williams, a long-time friend of more than 30 years, declared on Friday.