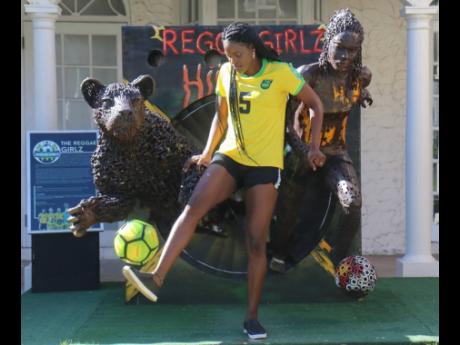 Photo by Ashley Anguin
Reggae Girlz captain Konya Plummer juggles a football in front of a statue of her that was unveiled at the S Hotel/Usain Bolt Tracks and Records property on Sunday.

Plummer, a member of the Reggae Girlz national football team, was recognised with the unveiling of a statue depicting her prowess in the courtyard of the Usain Bolt Tracks & Records in the tourism capital.

The artist behind the work is Germany-born Deidel Kloever, who also crafted the Bolt sculpture, which was commissioned by Crissa Group’s Christopher Issa.

The hotelier said that Legends Circle, which has become a popular site for tourists who stop daily to take photos with the icons, particularly Bolt, pays tribute to National Heroes Sam Sharpe, Marcus Garvey, and Paul Bogle. In months he expects to add a monument in honour of Louise Bennett-Coverley, the folklorist affectionately dubbed Miss Lou.

Kloever, who is married to Jamaican Gracie, who hails from Epsom, St Mary, the same district as Plummer, selected the former captain, who grew up playing football on his wife’s mother’s lawn.

Grateful to be the face of the Reggae Girlz on the Hip Strip, Plummer described the tribute as surreal.

“I am humbled to be a part of something this great. It has shown that I am on the right path,” Plummer told The Gleaner.

Plummer, who is in her last year at the University of Central Florida, Orlando, is looking to play professionally when she graduates in May 2020.

Uncertain of which club, she says she is putting her trust in God, while keeping hope alive that she will be picked by a top team.

“As females, we have our financial constraints, so I am looking for a team that will be able to help me to support my family,” she said, adding that team synergy was a crucial goal.

Brother Ronardo Plummer said he was not surprised by the former skipper’s meteoric rise despite her rough background.

“It is not unbelievable to see her statue here today,” Ronardo told The Gleaner. “I expected this from her. I knew she had the potential.”

Melesha Kloever, representing her father, the sculptor, said she had, as a kid, watched Plummer as a kid playing football on her grandmother’s lawn and knew that she was special, but never once anticipated she would have become a celebrated star.

“This is amazing, we are so proud of her,” Melesha said.

Jamaica is the first Caribbean nation to qualify for the Women’s World Cup.

The team, Issa said, is young and poised to accomplish great things in the future.