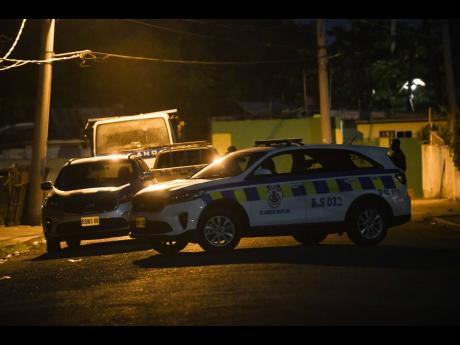 Ricardo Makyn/Chief Photo Editor
A police service vehicle blocks access along Bowens Road, in the vicinity of Waltham Park Road, where six people were hit in a drive-by shooting around 6:30 p.m. Up to press time, one woman was pronounced dead.

Six persons, including a two-year-old infant, were shot about 6:30 yesterday evening on Bowens Road, off Waltham Park Road, in the St Andrew South Division, one of seven police zones under a state of emergency.

One woman has since been confirmed dead, another in critical condition, while the infant was rushed to the Bustamante Hospital for Children.

When the news team visited the area last night, one resident shared concerns that residents flooded the streets immediately after the shooting, hampering the reaction of soldiers who were on foot patrol.

“When the incident happen, the people dem from down the other side of the road come out. So the soldier dem couldn’t get fi move as fast as they wanted, and mi think a that’s why the man dem get weh,” one resident told The Gleaner.

“Even if you tell people to stay in, dem a go come out same way because a so ghetto people stay. Dem look out for each other, so when anything happen, dem a go run out to make sure dem loved ones all right.”

South St Andrew was one of the bloodiest police divisions in Jamaica last year, with murders climbing by 12 per cent to 166.

The drive-by shooting was strategically orchestrated, a resident theorised.

“The soldier dem always a walk round, and dem very present inna the place. It obvious seh the man dem a watch, you know, because as the soldier dem move off, dem attack. The car circle two time, and one man said that he was out there when the car circle back and him see the window wind down and supm push out, and him run off,” he said.

Another resident said that dreams of peace in the community have again been shattered.

“Look how the place did nice, and thing, and the man dem come and mash it up. Look how wi start the year good, and now the man dem just come and cause this,” the resident said.