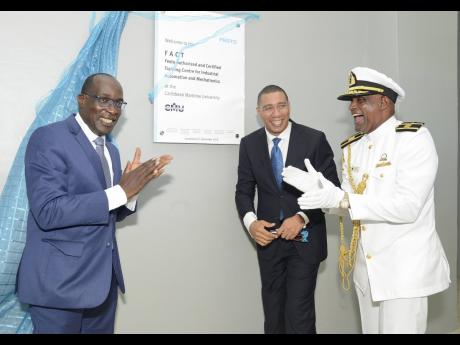 File
Then Education Minister Ruel Reid (left) and Caribbean Maritime President Fritz Pinnock (right) cheer during the opening of the Festo Authorised and Certified Training (FACT) Centre on September 19, 2018. At centre is Prime Minister Andrew Holness. FACT Centre Executive Director René Flores was engaged without a formal contract and his position was not advertised, a special auditor general’s report revealed. 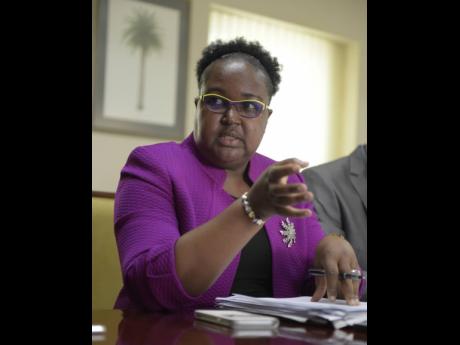 Grace McLean, permanent secretary in the Ministry of Education. File 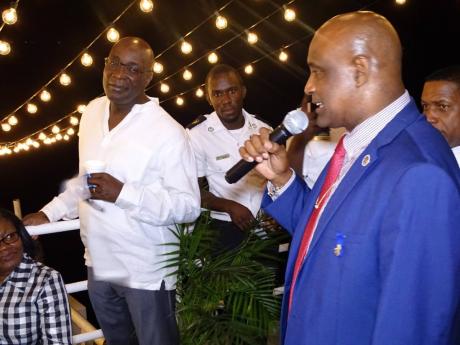 File
Fritz Pinnock addresses a party held for then Education Minister Ruel Reid. An auditor general’s report uncovered that attempts were made to classify expenses related to the party as for a meeting.
1
2
3

A trail of questionable spending, flagrant human-resource breaches, and other violations of government protocol has been uncovered at the Caribbean Maritime University (CMU) in a much-anticipated Auditor General’s Special Audit Report.

The revelations have again thrust Ruel Reid, the embattled former minister of education, and Fritz Pinnock, CMU president, into a whirlwind of controversy a week before they are slated to appear before the Kingston and St Andrew Parish Court on corruption, fraud, and misappropriation charges.

Pinnock, the man once regaled as the architect of the school’s transition from an institute to a university, is painted as a power broker who took unilateral decisions on recruitment without approval from the CMU’s Council, the board set up to provide oversight.

The Gleaner has seen a copy of the report, which indicates that Pinnock made decisions that undermined his fiduciary responsibility to the university while breaching its human-resource policy with impunity.

The report also places other senior officials at the CMU in the spotlight for their failure to establish proper internal controls and risk-management systems to reduce losses and prevent regulatory breaches.

Questions have been raised in the auditor general’s report about US$10,440 that had been reimbursed to the CMU president for costs associated with a trip he made to Oxford, England, in 2016, to collect an award that appeared to be of a personal nature.

According to the report, the CMU Council did not grant approval for the university to absorb the cost of the president’s participation at the award ceremony.

The auditor general has recommended, in accordance with the Financial Administration and Audit Act, that the permanent secretary should cause an investigation to determine whether the award accords any benefit to CMU. The award, according to the report, has stirred controversy in the British press, a matter that has reportedly been brought to the attention of Permanent Secretary Dr Grace McLean.

In another eyebrow-raising revelation, the audit uncovered payments amounting to $2 million made by the university for close protection services (CPO) for former minister Reid, but the institution’s records showed no basis for the expenditure.

However, the Auditor General’s Department was told that the payments were for the provision of services on weekends to the former education minister, Ruel Reid.

The Hyacinth Bennett-led CMU Council appeared to have been sleeping on the job as the report indicated that the oversight board failed to implement the required systems to facilitate periodic independent audit reviews.

Details of a plethora of parties staged for at least two former senior officials at the ministry and a senior member of the CMU have also been set out in the report.

And it appeared that the education ministry sought to cover its tracks when it designated payments amounting to more than $400,000 for a party for the embattled CMU president on August 16, 2018, as expenses for an official meeting.

A conflict of interest was also identified by the auditor general’s team, in which an officer of the education ministry solicited contributions from the owner of an entity with which the ministry does business. The business owner was a partner to the ministry’s CAP programme, being the largest recipient over the 2017-18 and 2018-19 academic years, committed to fund the party. Review of the ministry’s documentation indicated that the function was held. Public officers are forbidden from soliciting or accepting gifts in accordance with Section 4.3 of the Staff Orders (2004).

On another major issue, the report said it saw no evidence that the company contracted to supply sandwich panels and other materials for a new $701-million student block at the CMU was legally registered.

It said that the CMU paid the full cost of US$621,132 for sandwich panels despite the absence of a formal contract, bank guarantee, or irrecoverable letter of credit to secure CMU’s interest. The amount reportedly exceeded the 50 per cent deposit provided under the Government’s Procurement Guidelines.

Further, the amount paid to the company was $45 million in excess of the quoted figure of $80 million, for which the permanent secretary granted approval for use of the direct contract methodology under emergency by way of correspondence dated April 9, 2018.

While highlighting the foregoing issues, The Gleaner will not provide further details until the report is tabled in Parliament.

The report indicated that the CMU started payment for construction works in September 2017. Up to September 25, 2019, the CMU paid $98.5 million to various suppliers to provide material and labour to execute the works. However, CMU did not present the requisite building plans for the construction from the Kingston and St Andrew Municipal Corporation. In addition, CMU did not present the formal agreements or contracts that would govern the procurement of material such as hardware supplies and premixed concrete.

Executive director of the CMU’s Festo Authorised and Certified Training (FACT) Centre, René Flores, was also engaged without a formal contract and his position was not advertised, constituting a breach of the university’s HR policy.

The auditor general’s report revealed that the CMU had paid approximately $3.3 million for an extended hotel stay for the then newly recruited director in June 2018.