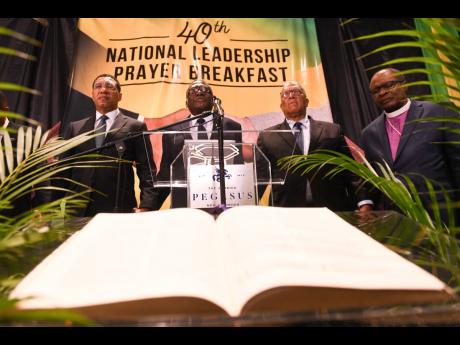 As the nation struggles to recover from the despair over a recent spate of murders of women by ex-lovers, Chairman of the Jamaica Umbrella Group of Churches Bishop Conrad Pitkin has made a plea for church leaders to take a greater stance on the fight against domestic violence.

Pitkin was speaking at the 40th annual National Leadership Prayer Breakfast, which was held yesterday under the theme “Pursuing the Power of Peace”.

The bishop, who gave the main address, referenced two recent cases of domestic violence, which he said “speaks loudly to the aggression in our society”.

“We have more work to do. It is more than preaching. We need to get out of the four walls of our sanctuary and be more visible and vigilant in our communities – not only be seen – but our influence needs to be felt as a church in this country,” he said.

Pitkin appealed to Jamaicans to commit to a life of peace and to seek to resolve differences through mediation.

Bishop of Power of Faith Ministries Delford Davis explained that the Church is a promoter of marriages but noted that domestic violence has been damaging numerous families.

“In as much as our first port of call is reconciliation, we also believe sometimes it reaches a point where persons have to take the hard decision,” Davis said.

Though not an overwhelming number, Davis, who is also a marriage counsellor, said he has dealt with cases of domestic violence.

“I have had to say to couples sometimes, ‘In the best interest of each and both, you better go your separate ways,” the bishop said.

Pastor Stevenson Samuels said the Church was already taking steps to address domestic violence through a partnership with the Victim Support Unit.

“Family Life Ministries has an outreach programme specifically for couples that are not married ... . There are marriage clubs that operate in many churches, and we have workshops and seminars that we offer to married couples to give them ideas on how to resolve conflicts and how to plan for a healthier marriage,” the Escarpment Road New Testament pastor said.

Speaking with The Gleaner after the Prayer Breakfast, Pitkin appealed to couples: “Don’t wait until the situation gets out of hand. At the first sign of conflict or disagreement that can move itself into something more serious, find a counsellor and deal with it.”