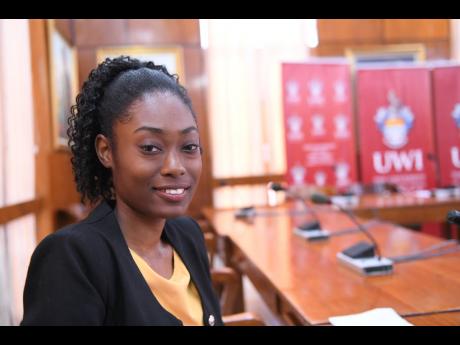 Ricardo Makyn/Chief Photo Editor
UWI student Moesha Clarke is a beneficiary of the scholarship and bursary programme funded by the school. 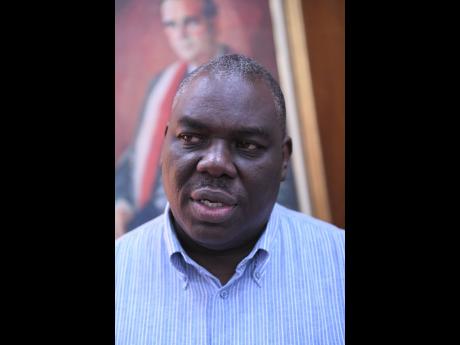 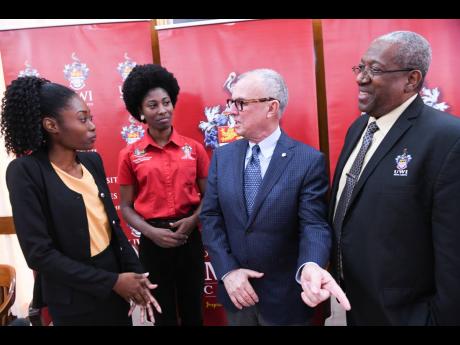 After maintaining a 3.5 grade point average (GPA), bearing hunger some days and travelling for hours to get to The University of the West Indies (UWI), Mona Campus, to pursue her studies, 22-year-old Moesha Clarke was told she could be deregistered for owing about $45,000 in her final semester.

Clarke had secured a student loan to pursue a double major in international relations and economics in her first year, but then she had issues getting one of her guarantors to commit the following year. For her second and third year, she depended on scholarships and the modest income she earned from working in one of the labs on campus to get her through.

As a double major, she was required to complete an extra semester, but she found that it was difficult to secure a scholarship beyond year three, despite having good grades and being a very active student volunteer.

“I am not aware of many scholarships that accept you if you only have one semester left. Normally, they give scholarships for the year or a full scholarship for three years,” said Clarke, who sent out several applications in her bid to seek help.

While her parents have been very supportive, Clarke, who resides in Bog Walk, St Catherine, said they were not in a position to assist her with tuition and so she tried to cut costs by residing at home and taking snacks to school most days for lunch. This meant leaving home from 5 a.m. and sometimes not getting home until after 11 o’clock at nights.

The McGrath High School alumnus had sought to get a full-time job after secondary school to finance tertiary studies, but was unsuccessful. Her own circumstances became a catalyst for her area of study, as she hopes to one day work for the International Monetary Fund or the World Bank to help formulate policies to alleviate poverty in developing countries.

But the email she received warning of her impending deregistration last year threatened to derail her dreams.

“I was completely stressed and I didn’t know what to do,” said Clarke who had managed to pay a portion of her final-year tuition after receiving $100,000 from the Ministry of Labour and Social Security. This was after completing 30 hours of community service.

After speaking to several individuals on campus, including the University Guild president, she was given an extension to pay the outstanding $45,000. Then the final-year student got news that the money she owed would be paid for through a grant that was financed by chancellor of The UWI, Robert Bermudez.

Clarke was one of several students who benefited from the $1.5-million donation handed over yesterday at the campus’ Mona Council Room.

Much like Clarke, registrar of The UWI, Mona, Dr Donovan Stanberry, said that there are many students on campus who are driven by ambition but do not have the means to finance their education. He said that he has come across many of them in the Faculty of Medicine, in particular, where students are expected to pay their full tuition amounting to US$28,000 annually.

“I was taken aback when I just got here last year to find out that over 200 students of those applying for medicine have perfect CSEC scores,” said Stanberry, who noted that several of them were from poor families.

Some of these students, he said, had secured up to 12 subjects with straight A profiles in CSEC and six or more in CAPE.

“To look on that student and say, ‘Listen, we can’t admit you because you don’t have any money,’ it breaks any heart,” he said.

Stanberry said that 50 bursaries are generally given to medical students, allowing them to pay only 20 per cent of their tuition, but after realising that the need was great, Education Minister Karl Samuda was asked to intervene. The Ministry of Education gave the university nearly US$1.5 million this academic year to assist several of these students. He said the university also gives scholarships to assist needy students.

“We have given out scholarships to the tune of over $900 million per annum. That’s nearly 10 per cent of our revenue,” he said.

In October 2018, the university faced backlash when 2,000 students were at risk of deregistration. The UWI’s current Guild President Christina Williams knows how devastating this can be.

She said she made it her personal mandate to decrease the number of students being flagged for deregistration at the university, which has about 20,000 students currently.

“This year, when we look at the numbers, we are actually seeing an almost full 100 per cent reduction in deregistration,” she said.

Williams attributes this drastic reduction to several factors, including the fact that more bursaries, grants and scholarships are being made available to students. Last November, Prime Minister Andrew Holness handed over $2.5 million to assist needy students.

The university also agreed to remove all students who owed less than 90 per cent of their tuition from the deregistration list. As a result, there were only about 300 students on that list at last check.