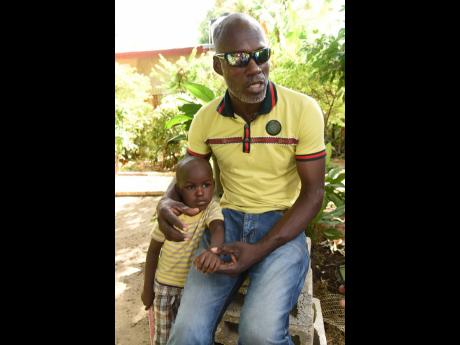 Ian Allen
Warren Gray and his three-year-old son, Worrell, at home in Farm, May Pen, Clarendon. Warren, who has slowly been losing his sight, says he allows his daughters to go out and beg for money to send themselves to school. 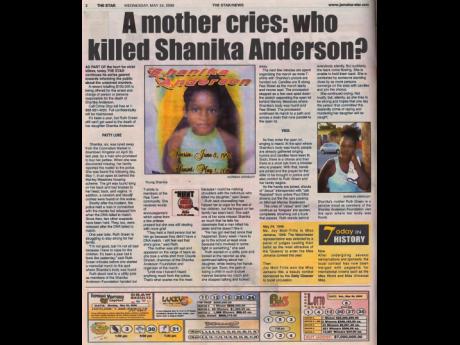 Contributed
Death of a mothers cry
1
2

Fifty-year-old Warren Gray lives in Effortville with his six children and their mother. Both parents are unemployed and sickly, so at least four of their children take to the streets of May Pen, Clarendon, at night, begging to support the household.

None of the four are older than 16, and the youngest – two girls, ages 12 and 10 – are not exempt from the hustle, which Gray said sometimes sees the children on the streets until 1 a.m.

In fact, it is only because of a state of emergency (SOE) imposed in the area last September that the children have been coming home ‘early’ in recent times, and early to Gray is around 10 at night.

“Life rough because the maintenance for dem to go to school, me nuh have it. Me have cataract in one of me eye and that prevent me from can see,” said Gray, who last Thursday lifted his sunglasses to reveal a protruding lump over his left eye.

Their mother is also suffering from heart complications, according to Gray, who confessed that this has significantly impacted their ability to provide for their children.

“So, for the youths dem go road and beg sometimes dem have to use it to go back to school, and it prevents them from go steal,” he said, adding that one of the girls attends primary school, while the other is in high school in the parish.

Gray’s youngest child is four, and the struggling father fears that the boy may have to one day join his siblings on the streets, begging, if things do not improve.

Last Thursday was among the few days that the girls had been off to school since January, and it was only because they spent Wednesday night, up to 11 o’clock, on the road begging for their lunch money, he said.

Though they need the funds, Gray said he is a worried wreck whenever his daughters and two older sons stay on the road later than he expects. Sometimes he battles his foggy vision to go and search for them.

“Like even in the back-to-school, like uniform-wear or so, they have to ask people to help them. They come in with the money and me will help them to calculate and share it,” he said, adding that the sum varies each night but he makes it work.

“It dangerous and me consider it but most times it is because of school why me really allow dem because the time is so serious, I know.

“I know seh dem can go beg a man and him teck dem weh inna car, and me nuh hear from dem again.”

Sometimes, however, the children strike luck, and strangers – particularly at the fast-food restaurants in May Pen where they frequent – will give more than the spare coins in their pockets.

Some offer schoolbooks and shoes, while others will pay more than the selling price for sweets that the children buy to resell to make a profit.

“They get money from PATH (Programme of Advancement through Health and Education) still, but remember PATH is based on dem school attendance, and a lot of times dem missing from school,” said Gray with his young son clutching his leg.

The struggling father is one of several parents in Kingston, St Andrew, Clarendon and Portmore, St Catherine, who confided in The Sunday Gleaner that they had knowledge that their children were out on the street begging from strangers.

Most declined to speak publicly for fear that their children would be taken away from them by the Child Protection and Family Services Agency (CPFSA).

While that may be a reality for Gray, he is more concerned about securing help for them. He is confident that if he is aided with opening a shop in his yard, he will be able to better provide for his children, whom he said he loves with everything in him.

Last week, however, Tivoli Gardens resident Ruth Green issued a warning to parents like Gray who allow their children to roam the streets unsupervised.

Fourteen years ago, her six-year-old daughter, Shanika Anderson, was lured away from the Coronation Market by a man who reportedly promised to buy her patties.

Her body was found with bruises to its head, back and vagina, miles away in Manley Meadows in east Kingston. A used condom and bloody clothes were also found at the crime scene.

Shortly after the discovery, two suspects were taken into custody for her death. But they were subsequently released after their DNA did not match that taken from the crime scene.

To this day, young Shanika’s death remains an unsolved mystery, and it pains Green to know that her daughter’s killer(s) could still be anywhere.

“I would like for it to come to a close because, at the end of the day, I can be rubbing shoulders with the killer,” she said on Wednesday, hopelessly fighting back tears as she spoke.

Green said she took care of all of her six children, and that Shanika was never one to beg. She is convinced Shanika left with someone who was known to her and her family.

“The Shanika that I know, she fought and she was making a lot of noise,” said the grieving mother, envisioning her daughter’s final moments.

A year before Shanika’s death, nine-year-old Shanika Shakes and her friend, Shauna-Kay Ledgester, were found dead in a Westmoreland canefield.