Brits soak up the thrills on Port Royal cruise 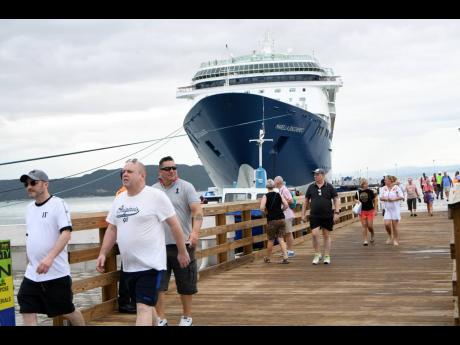 Rudolph Brown/Photographer
Tourists mill about at the Port Royal Cruise Ship Pier after the Marella Discovery 2 docked at the east Kingston town on Monday.

Melanie Oakley of Birmingham, England, has a recommendation for the Port Authority of Jamaica (PAJ) in regard to its offerings at the Port Royal Cruise Ship Pier: Put in a well-stocked duty-free store with a variety of gift items.

When The Gleaner caught up with the Jamaican, who left for the motherland almost six decades ago, she was seated in the company of her eldest granddaughter who was named after her, Melanie Brown, in the courtyard of the Port Royal Cruise terminal facility relaxing before heading back to board the Marella Discovery 2.

This was their fourth stop on the cruise, which had docked in Panama, Puerto Rico and Colombia, en route to Jamaica, and was scheduled to visit Montego Bay before heading to Cuba and then Cuixmala, Mexico.

For Oakley, who had not visited Jamaica in some time, the brief homecoming was well worth it.

“The place is clean” was one of the first things that caught her eye. She made a beeline for the booth advertising ‘Jamaican Beef Patties’, her granddaughter in tow, once they had cleared immigration and customs. Jerked chicken from Walkerswood was next on the agenda and then she bought three packets of Blue Mountain coffee at bargain price from the Jablum booth.

“They are so expensive in Harrods and Fortnum & Mason,” she said of the premium brand, referencing two of the more exclusive store chains in Britain.

The Melanies were chilling out, having had a full day of tour, started at the Kingston Craft Market in downtown Kingston, visiting Emancipation Park, National Heroes Park, The University of the West Indies, and the National Stadium.

“Yea, I went to Mona and was very impressed by the hospital,” she declared.

There was, however, one note of mild disappointment.

She had promised her 96-year-old mother to visit Coronation Market and take some pictures to share with her upon returning home. She did not make it to the largest open-air market in the English-speaking Caribbean and there was a sigh of regret when she realised that in visiting the craft market, she had come very close to the place where Mom had made many an early-morning outing.

That aside, Oakley and her granddaughter were very glad to have visited their homeland, and when asked whether they still enjoyed ground provisions like yam and Irish potato, as well as green plantains, the younger Melanie answered strongly in the affirmative.

They were contented to sit back and relax at the far end of the courtyard, even while at the other end, popular music blasted from speaker boxes, triggering a dance-off between a group of locals and some not so bashful cruise ship passengers.