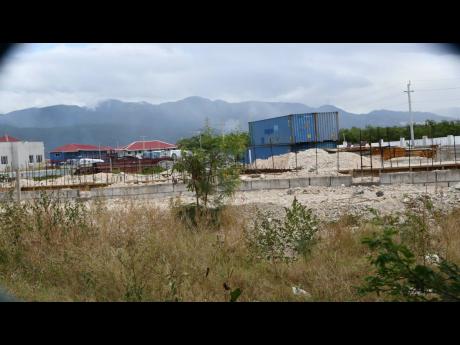 Rudolph Brown/Photographer
The $701-million, three-storey building under construction at the Caribbean Maritime University’s east Kingston campus, which was scheduled to be completed this month, is months off schedule.

The oversight body of the scandal-scarred Caribbean Maritime University (CMU) is expected to be dumped by the Government in a bid to staunch the haemorrhaging of taxpayer funds and public confidence in the wake of a damning report from the Auditor General’s Department on a spending spree and other governance breaches.

Minister with responsibility for education, youth and information, Karl Samuda, will make a statement to Parliament today less than 24 hours after CMU Council Chairman Hyacinth Bennett resigned as pressure grows on Prime Minister Andrew Holness, the de facto education minister, to act on a culture of rogue spending.

Samuda told Beyond the Headlines’ host Dionne Jackson Miller yesterday that he would announce a number of changes at the CMU.

He said that Bennett informed him that she had stepped down as chairman of the council. This development comes amid mounting pressure for members of the council to resign.

Bennett quit ahead of a planned emergency meeting of the council to discuss the deepening crisis at the beleaguered institution.

Following the publication of Gleaner articles unveiling multiple instances of questionable spending and glaring gaps in the council’s oversight role, at least three other members of the council tendered their resignations late last week.

The Gleaner named the council members yesterday as listed in a report from the Cabinet Office. However, Archibald McDonald, who was listed as a member of the council, informed The Gleaner that in early 2018, he received a letter from the education ministry enquiring whether he would be willing to serve on the oversight body. He said he was disappointed when he did not receive a letter of appointment from the ministry. McDonald made it clear that he had never been invited to or attended a meeting of the CMU council.

In a statement yesterday, Peter Bunting, shadow minister on education and training, noted with “deep consternation” the series of reports in the media on aspects of the auditor general’s report on the CMU.

He said the report highlighted systemic and sustained abuse of public trust, as well as dereliction of duty on the part of the council that had been charged with governance.

“While the resignation of all board members is a given, the taxpayers of the country are entitled to a full accounting of the stewardship of the board. Silence on the part of resigned board members is not acceptable,” said Bunting, adding that he was looking forward to engage the members of the board at the Public Accounts Committee, which reviews reports from the auditor general.

Meanwhile, The Gleaner yesterday asked Town Clerk Robert Hill whether the Kingston and St Andrew Municipal Corporation would be placing a stop order on a new block being constructed at the CMU which the auditor general, in her special report, said did not get the required approvals.

Hill said that he would have to review the report before providing a response on any action.

“I have not seen the report. I would have to investigate. I have no access to the report which is to be tabled in Parliament tomorrow (Tuesday). At that point I would speak with the city engineer to be able to respond intelligently.”

When constructed, the new facility is expected to house five lecture theatres, 20 mini-halls/classrooms, and 40 tutorial rooms.

The report revealed that up to September 25 last year, the CMU paid a total of J$98.5 million to various suppliers to provide materials and labour for the project. However, up to October last year, only the substructure or foundation of the project had commenced, the auditor general said.

When our news team visited the campus yesterday, the project, which was slated to be completed by the end of January, appeared to be months off schedule.

At today’s sitting of the House of Representatives, Speaker Pearnel Charles is expected to table the auditor general’s report on the CMU, which he failed to do at the last sitting. According to constitutional expert Dr Lloyd Barnett, the Speaker was obliged to table reports from the auditor general, indicating that he had no discretion in the matter.

The Gleaner has seen a copy of the auditor general’s special audit report into allegations of malpractices at the CMU and has provided details on myriad governance breaches, including procurement and contract-management malpractice that undermined value for money, and improper use of bank accounts, among other areas of concern.