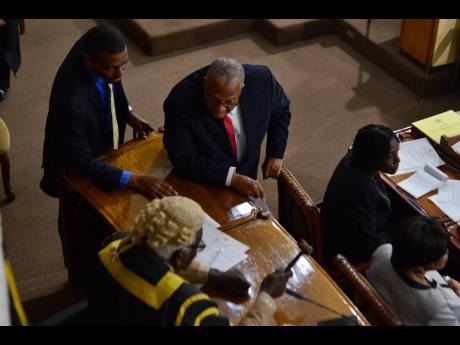 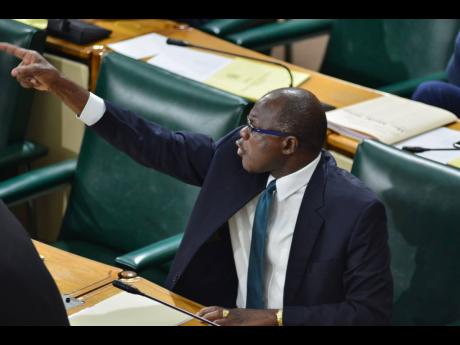 Speaker of the House of Representatives Pearnel Charles yesterday fought strenuously to shut down a motion of censure against him – the first of its kind to be moved against any Speaker in more than five decades, according to former editor of Hansard, Dessler Smith.

Smith has edited Hansard, the official verbatim records of the House of Representatives, from about 1970. He retired from Parliament in 2013.

However, despite stubborn resistance from Charles, mover of the motion, Julian Robinson, member of parliament for St Andrew South East, was equally adamant that he had a right to table the motion for debate at the next sitting of the Parliament.

Tensions reached boiling point during the exchange between Robinson and Charles when the Speaker accused the Opposition MP of lying, charging that the member did not present the motion to him and, as such, did not have permission to move it.

“I am not going to stay here and have you lie,” Charles said.

However, Robinson countered, saying he had sent a copy of the motion to the Speaker and copied it to the clerk to the Houses of Parliament.

“I take my integrity seriously, you know. If I sent you a motion and copied the clerk, don’t come here and tell me I don’t give you no motion. Don’t do that!” an agitated Robinson declared.

Robinson insisted: “The clerk is here, let the clerk show you.”

However, Central Kingston MP Ronald Thwaites rose on a point of order, urging Charles to recuse himself in the matter, noting that the rules of natural justice apply in Parliament and elsewhere.

“No discussion regarding its admissibility or its veracity ought to be made when you are the judge in your own cause,” he said.

Thwaites urged the Speaker to allow his deputy, Franklyn Witter, to preside in the matter concerning the censure motion against Charles.

Leader of the Opposition, Dr Peter Phillips, said that Standing Orders 24: 15 stated that the motion was a matter relating to privilege and did not require notice.

Further, Phillips said that Robinson followed the procedures specified even though he had been exempt from notice according to the rules of Parliament.

“What arises is a sense that the position of authority in the House is being used to muzzle some members of the House from carrying out their duties on behalf of their constituents and the public.

“A right is a right, pleasant or unpleasant,” he said, accusing Charles of using “bullish” aggression to try to railroad the House from doing its job.

At the end, St Catherine South East MP Everald Warmington was overheard urging the Speaker to allow the member to move his motion.

The motion, among other things, indicated that Charles had a duty to allow the auditor general’s report on the CMU to be tabled on January 14, after receiving it before the date in question. He cited provision in the Constitution and the Financial Administration and Audit Act, which gave Charles no discretion in the matter.

The motion was eventually moved and debate is expected at the next sitting.