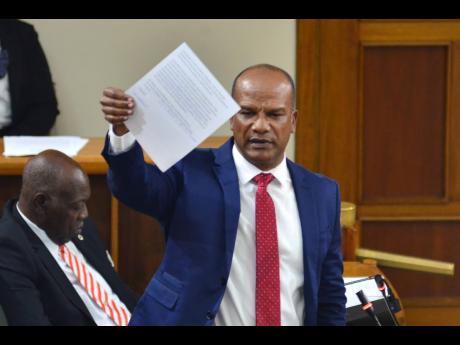 Kenyon Hemans/Photographer
Member of Parliament for Manchester Central Peter Bunting gestures during Tuesday's sitting of the House of Representatives.

Charging that claims by Karl Samuda, minister with responsibility for education, that the Caribbean Maritime University (CMU) had no challenges in its daily operations at this time, Peter Bunting, the opposition spokesman, said that the school’s reputation was in tatters.

Responding to a statement from Samuda on the CMU in Parliament yesterday, Bunting contended that “students are regretting going there. Many persons who have contributed to it are cut up and hurt because of what is happening at the institution”.

He said the same players who brought the institution to its knees were still at the helm of the CMU.

Despite claims by Samuda that there have been significant improvements in procurement activities, human-resource practices, and the general administration of the university, Bunting suggested that it was difficult to accept the minister’s assessment when the same persons – with the exception of its president Fritz Pinnock, who was on leave – were calling the shots.

Bunting said there was a deliberate scheme at the CMU involving an interlocking web of cronies, adding that the objective of the plan was to “loot the taxpayers of this country”.

Samuda earlier told his parliamentary colleagues that Cabinet was expected to review the names of persons recommended for appointment to the new CMU Council on January 27, even as the former members submitted their resignations, with only one left to throw in the towel. Once approved, the new council will hold its meeting the following week, Samuda added.

At the same time, Bunting has taken issue with plans by Prime Minister Andrew Holness to make a full statement on the scandal-scarred CMU, beyond the precincts of Gordon House, saying the head of government should face questions in the House.

“What we see today is the minister being sent out as a nightwatchman because the prime minister is afraid to face the bowling in this Parliament. I say to the prime minister, this is not a profile in political courage, this is somebody seeking to scurry away from the hard questions that we should be asking him in Parliament.”

Bunting also made it clear that the resignation of the council did not mean that they should “slither away in obscurity”. He indicated that they would be summoned by the parliamentary oversight committee to address the myriad concerns in the auditor general’s report.

Samuda, in his remarks, had insisted that he had not seen a copy of the auditor general’s report, noting that only the permanent secretary had reviewed the draft document. “That report that was circulated in The Gleaner or in the other media houses did not come through the normal official channels. I have a clear idea in my mind as to where it came from,” he said.

However, on August 22, 2019, the CMU had responded to the auditor general’s report, a clear indication that the institution had sight of the document.

Weighing in on the issue, St Andrew South East Member of Parliament Julian Robinson accused the Holness administration of denying any knowledge of the serious governance shortfalls and alleged problems at the CMU.

“The portfolio minister was fired for corruption ... (and) you are telling me that you had no sight of the report?” he questioned.

Samuda also disclosed that he had met with law-enforcement officials from the Financial Investigations Division on matters relating to the CMU.