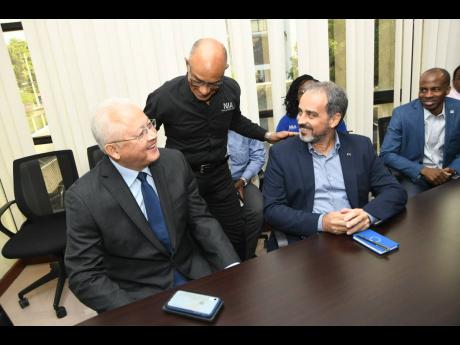 Rudolph Brown
Professor Trevor Munroe (standing), executive director of National Integrity Action (NIA), speaks with Minister of Justice Delroy Chuck (left) and Luca Lo Conte, programme manager for the European Union Delegation to Jamaica, while Lloyd Distant (right), president of the Jamaica Chamber of Commerce, looks on during a press conference at which the Corruption Perception Index 2019 was released at the offices of NIA in New Kingston yesterday.

Transparency International’s 2019 Corruption Perception Index (CPI) has positioned Jamaica as the fourth most corrupt state among Caribbean countries ahead of Guyana, Trinidad and Tobago, and Haiti.

The 2019 index, released yesterday, showed Jamaica scoring 43, one place lower than the 44 it scored in 2018, in a context where zero is deemed very corrupt and 100 is very clean.

Professor Trevor Munroe, head of National Integrity Action, who announced the results of the CPI for Jamaica yesterday, highlighted several events last year that might have contributed to the various scores and ranks of analysts that have allowed for that slippage.

Among the developments in 2019 that Munroe said might have led to Jamaica’s poor showing on the 2019 CPI were the sacking of former Education Minister Ruel Reid and his subsequent arrest and charge on corruption-related charges. Another development listed by Munroe was the disclosure by the Integrity Commission that the statutory declaration of Prime Minister Andrew Holness was not “cleared”.

Looking ahead, Munroe said action must be taken to arrest and reverse the decline by Jamaica on the CPI.

The NIA boss urged the administration to immediately table in Parliament the long-awaited regulations to bring MOCA into operation fully as an independent entity separate from the police force.

He wants the public disclosure, “as a matter of urgency”, of the Petrojam investigation report and thereafter, action by recently appointed Director of Corruption Prosecutions at the Integrity Commission Keisha Prince.

Munroe is also batting for early parliamentary approval of the new regulations to reduce partisan political influence on the selection of boards to oversee public entities. The regulations were introduced by Finance and the Public Service Minister Dr Nigel Clarke.

The head of the leading corruption watchdog is also pushing for the trial of Reid, Caribbean Maritime University (CMU) President Fritz Pinnock, and others charged with corruption to be prioritised and dealt with expeditiously.

“It cannot be acceptable that the resolution of the matter before the courts drags on for anything close to the six years that it took to resolve the case involving former minister of state Kern Spencer. This would be completely unacceptable and a retrograde step which will be running counter to the pledges so far being honoured by the honourable chief justice.”

Munroe also told journalists that the Parliament should immediately establish the parliamentary committee to provide oversight of the Integrity Commission as a critical first step to giving the anti-corruption body a fresh start. He also wants this committee to review recommendations by the commission to create greater transparency in its operations under the law.

On the question of the findings of the Auditor General’s Department, detailing a plethora of breaches and questionable spending at the CMU, Munroe said the prime minister would be well advised to indicate what actions should be taken in the matter.

He recounted that the prime minister had vowed that corruption would not be tolerated under his watch.

Some reasons Jamaica fell on the corruption index

Head of National Integrity Action Professor Trevor Munroe has listed a number of developments in 2019 that might have contributed to a deterioration of Jamaica’s position in both score and rank.

1. March 2019 – Resignation of Education Minister Ruel Reid in the context of corruption-related allegations – no reason offered at the time despite enquiry.

2. April 2019 – Investigation report of the sale of Rooms on the Beach property by the contractor general alleging improper conduct.

5. July 2019 – Annual report of the Integrity Commission says that the investigation of Petrojam was completed and referred to the director of corruption prosecution. Since then there has been no disclosure regarding the consequences of this referral.

6. August 2019 – Retirement of the director of corruption prosecution from the Integrity Commission following differences between the commissioners and the director regarding Rooms on the Beach report – no reason offered by the retiree.

7. August 2019 – Controversy regarding the statutory declaration of the prime minister and the leader of the Opposition insofar as the declarations only indicated purchase price and not the estimated market of immovable property held by the declarant, spouse, and children as indicated by the third schedule off the Integrity Commission Act.

8. September 2019 – Chairman of the Integrity Commission resigns and no explanation offered.

9. For the entire year, regulations to bring into operation and to make fully independent from the Jamaica Constabulary Force the MOCA, are not yet tabled in the Parliament.

Here is how assessed Caribbean countries appear in the ranking:​

St Vincent and the Grenadines