Mosquitoes under pressure in St Catherine 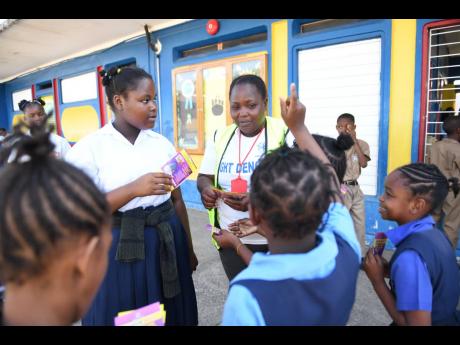 As an islandwide dengue mitigation campaign got into gear yesterday, school administrators like Marlon Campbell say it couldn’t have come sooner.

Campbell, principal of the Spanish Town-based St Catherine High, said that the mosquito-borne disease that has killed at least 81 Jamaicans in the last two years had hit close to home.

Speaking at the launch of the Mosquito Eradication Programme at the St John’s Road school, the headmaster said that building awareness was a crucial front line in the battle to beat back the epidemic.

“We have a teacher who was hospitalised due to dengue. Therefore, we are thankful for the decision to launch such a programme at the school,” Campbell said.

He said that his administration would, beyond yesterday’s exercise, continue to treat breeding sites on the school compound with help of the environmental club. Approximately 2,400 students are enrolled at the school.

“Each person is at risk if we don’t heed the warnings. We will be treating any site that is created after rains,” Campbell added.

Meanwhile, Minister of Health & Wellness Dr Christopher Tufton also called for the fight against dengue fever to be an ongoing exercise.

“We are working with the health department to fully carry through the work with the vector-control workers to continue to spray and treat breeding sites,” Tufton said.

Dialogue was also promised with stand-in education minister Karl Samuda for the removal of old furniture from the compound of St Catherine High, a matter the administration said was a key concern.

“I am aware that if there is a policy in ministry that prevents the timely removal, I am sure the ministry would not be averse to have changes made to ease the possible loss of lives, as dengue can kill you,” the health minister said.

Meanwhile, along with scores of vector-control workers, the minister went to the Friendship Primary School, also in Spanish Town.

He warned against complacency about the mosquito-borne disease and implored students to be alert to hazards in their surroundings.

“My visit today is very special, as the students are here every day and their surroundings must be cared for. Therefore, we are going to spray this drain in the school to ease the possibility of mosquito breeding,” Tufton said.

It was revealed that in addition to 34 permanent vector workers deployed throughout the parish to search for and treat potential and existing breeding sites, 134 temporary employees have also been enlisted in the fight against mosquitoes.