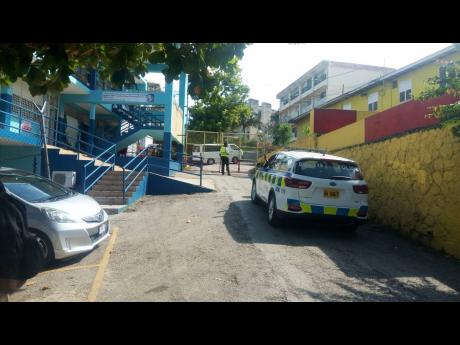 Photo by Hopeton Bucknor
A guard keeps watch on the compound of Cornwall College where the dean of discipline was assaulted by a parent and others yesterday morning.

President of the Cornwall College Parent-Teacher Association (PTA), Dr Garfield Campbell, has condemned an attack on a student and the dean of discipline at the single-sex high school in Montego Bay, St James.

Classes were suspended yesterday morning after a parent and a group of men allegedly assaulted the school’s dean of discipline as he sought to intervene in an assault on a student.

The incident occurred shortly after 8 a.m. while students and teachers were trailing in. When calm was restored, all students were sent home for the day while staff gathered for an emergency meeting with representatives from the Ministry of Education, the school’s board of governors, the PTA, and the police.

“There was an incident between two students at the school this morning and the parent of one of the students came by the institution and assaulted the other boy,” Campbell told The Gleaner.

“The dean of discipline intervened, and he, too, was attacked and assaulted by the parent.”

The attackers subsequently left the compound in a waiting motor vehicle.

“We do not condone acts like these, whether it be physical or verbal, on any teacher, student, principal or members of our school community,” said Campbell.

Yesterday’s incident comes on the heels of three similar incidents at schools in St James in recent months, including an assault on Cornwall College Principal Michael Ellis, who ditched his jacket in a bid to escape the fury of a mother who demanded answers about her son’s suspension from classes in November.

In one of two incidents at Corinaldi Avenue Primary School in November, a parent was arrested and charged after she assaulted a teacher who attempted to use her cell phone to record her behaviour.

A police source told The Gleaner that the law enforcers have identified at least one of the men involved in yesterday’s assault and said that steps were being taken to apprehend him.

“There is no question that he will be arrested and charged. We cannot allow persons to get away with this kind of assault on our institutions. It will not be tolerated,” the source said.