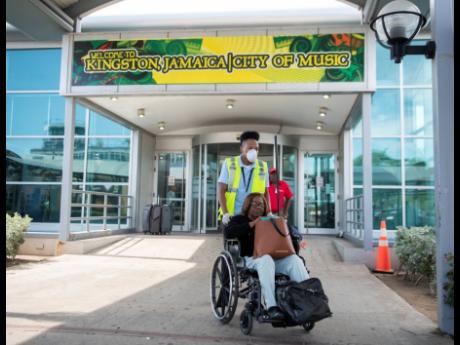 Gladstone Taylor/Multimedia Photo Editor
A worker is seen wearing gloves and a protective mask as he provides wheelchair assistance to an elderly traveller at the arrivals area of the Norman Manley International Airport on Tuesday. Staff were provided with protective gear as Jamaica ramped up its safety protocol at all ports of entry amid a global coronavirus outbreak.

Persons planning to travel between Jamaica and China have been urged to defer those arrangements amid a travel advisory issued by the Holness administration in a bid to prevent the spread of the coronavirus to local shores.

Health Minister Dr Christopher Tufton said yesterday that the decision was made to put this precautionary measure in place following discussions between the Ministry of Foreign Affairs and Foreign Trade and the Chinese Embassy about the potential threat of the virus.

“Persons who were planning trips to China, whether Jamaicans or Chinese, we are advising them to postpone, at least for the time being, those travel arrangements that they would have made or are planning to make,” Tufton said during an emergency press briefing at the ministry’s New Kingston offices.

The minister said persons already in transit would be quarantined in specially designed facilities on their arrival. The Government has already begun tracking those who have returned from China within the last month.

“We would ask those individuals, if they are not contacted, to make themselves available, either to their private physician or the public health system, because one of the other things that we would like to do is to do an assessment of those persons who have recently come into the island from China, via a third country,” said Tufton.

He said that the ministry would continue to monitor all ports of entry and consult with bilateral and multilateral partners, including the Chinese authorities.

Coronavirus deaths in China rose to 132 yesterday, with 5,974 infections confirmed, the Asian country’s National Health Commission has reported. At least 16 other countries have recorded infections, the British Broadcasting Corporation said.

Transportation to and from the Chinese city of Wuhan, the epicentre of the crisis, was shut down last week.

Jamaicans who are worried about relatives who are working or studying in China have been urged to contact the foreign affairs ministry, which has indicated that plans are in place to ensure that those concerns are addressed.

There was widespread panic yesterday amid social-media reports that a patient at The University Hospital of the West Indies was suspected of having contracted the coronavirus, but medical chief of staff, Dr Carl Bruce, denied that claim.

“The patient was transferred to us from another hospital and the doctors at the emergency room at The University Hospital evaluated that patient as we usually do,” said Bruce, who explained that an evaluation was done because the patient had a history of travelling to Asia, particularly China.

Doctors determined that the patient did not meet the case definition of the coronavirus, Bruce said.

Acting chief medical officer at the Ministry of Health, Dr Karen Webster-Kerr, said that samples taken from those suspected of contracting the virus will be sent to the Centers for Disease Control and Prevention in the United States and Public Health Canada for testing.