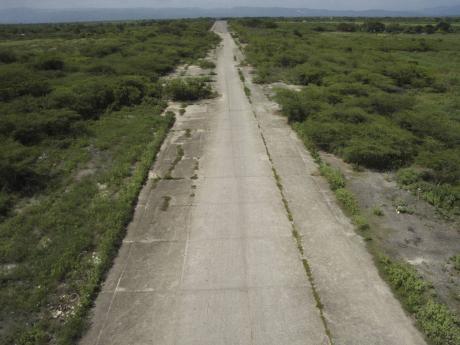 Not everyone is onboard the plane seated on the runway of Mike Henry’s ‘multi-modal’ aerotropolis development dream for Vernamfield in the mid-island parish of Clarendon.

During a January 15 meeting in Gimme-Me-Bit in the parish, with residents of New Yarmouth, Vernamfield and surrounding communities, fears were raised that government would forcible take lands they own using the Compulsory Land Acquisition Act after their “unanimous” refusal of the offers made.

Residents are also distrustful of agencies involved as, though the Airports Authority of Jamaica (AAJ) is the designated lead agency, as stated in a letter obtained by The Sunday Gleaner, offers received by letter from the National Land Agency (NLA) have given them the impression that the “stage has been set for a massive land grab”.

A December 2019 letter captioned ‘Land Acquisition – Vernamfield Development project, read: “The Government of Jamaica, acting through the Cabinet, has designated the Airports Authority of Jamaica (AAJ) as the lead government entity with responsibility for the proposed Vernamfield Aerotropolis Development, as well as the immediate Aerodrome Development…” .

Continuing, the letter stated that, by way of Cabinet decision Number 43/17 dated November 2017, “Cabinet granted approval for the AAJ to enter into negotiations with private land owners for the acquisition of certain parcels of land that will be required… .”

But while the letter also gave a commitment to “hold public meeting to discuss the development plans and hear from the community”, before any discussions were held, the offer letters arrived.

The AAJ, via Gazettes dated Friday, May 19, 2019, and Tuesday, June 18, 2019, had its position entrenched as lead in the development. Additionally, a 2019 letter from Henry made it clear that the “acquisition of land as approved by Cabinet will be handled by the AAJ as the funding agency…”.

Henry, who is minister without portfolio in the Office of the Prime Minister and member of parliament for Clarendon Central, sought to have a meeting with the land owners, and requested that the NLA send a representative.

Those impacted most include 25 properties, many with accommodated dwelling houses, including multi-storey dwellings, and sitting on lands between 20 and 33 acres in Vernamfield. One multi-acreage property was transferred to the Commissioner of Lands for $1, as the owners did not secure a title.

Residents who spoke with The Sunday Gleaner are not opposed to the development, but believe Government started on the wrong foot in the procurement process with “ridiculously low property offers”.

“People are being offered $800,000 per acre for their farms which they have developed for decades. That is an out-of-order offer,” one community official told The Sunday Gleaner.

Speaking to the issue before and after the January 15 meeting, they said the plans would not take off if the land offers are not immediately withdrawn.

“All of the offers made were below market value. Every single offer was unanimously rejected. These include properties that were valued three years ago, the offers are less than those valuation,” said another Sunday Gleaner source.

A property belonging to relatives of a prominent Jamaican attorney is among those impacted.

Distrust has been building for a long time, but climaxed during a February 2019 meeting at Garvey Maceo High School, The Sunday Gleaner was told.

“At that meeting, the AAJ was represented by Colin Leslie, the project manager. At conclusion, it was felt that he answered what he could, and what he thought he shouldn’t, he didn’t,” said another member of the group speaking with The Sunday Gleaner. At the January 15 meeting, the AAJ was represented by Lieutenant Colonel Oscar Derby, who is said to have “expressed surprise at the action of the NLA”.

Despite several attempts, Derby could not be reached by The Sunday Gleaner.

Noel Arscott, MP for Clarendon South, said one section of the property impacted includes a community known as White Wing.

He said lots were allocated during Orville Ramtallie’s tenure as MP for the constituency and, later, as housing minister.

“I don’t understand how there is no argument for relocation. I am also told that everybody is impacted, especially the individuals who were on the larger dairy lots. But, the whole thing has caused persons to lawyer-up,” Arscott said.

A resident with knowledge of the White Wing community said they were happy with the offers they received, given that they did not pay for the lands.

“Their only problem is that Government take long to pay. But they are willing to sell,” said the source.

The meeting was also addressed by Shernette Sampson, a representative of the New Yarmouth Housing Development Project.