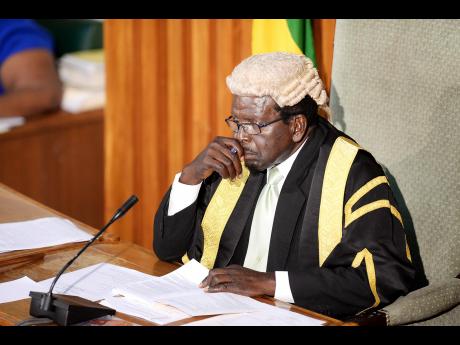 The motion sought to sanction Charles for refusing to carry out his duty when he failed to allow the Auditor General’s report on the Caribbean Maritime University to be tabled on January 14, after receiving it before the date in question.

Charles was heard telling leader of Government Business Karl Samuda that he would not be tabling the report.

Earlier this afternoon, Charles made a brief statement on the issue.

What the Speaker said today:

“I Pearnel Charles have no intention of covering up or misleading the House in any way. At no time would I be involved in any attempt to make any cover up for anyone outside or inside this parliament.”

Mover of the motion, Robinson, in a terse response, said: “In light of the Speaker’s statement I withdraw the motion.”

Prior to the start of the business of the House, key members on both sides of the political divide were seen engaged in intense discussions seemingly in an attempt to strike a compromise on the censure motion.