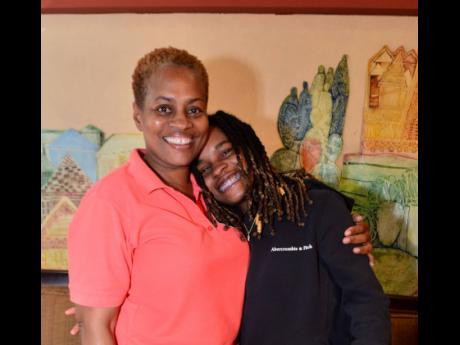 Kenyon Hemans/Photographer
Reggae singer Koffee is embraced by mom Jo-Anne Williams during a press briefing at the Norman Manley International Airport on Monday. Koffee won the Grammy for Best Reggae Album just over a week ago.

There has been no slowing down for Koffee after winning the Grammy Award for Best Reggae Album last week Sunday.

The singer appeared at the inaugural Viewtopia Music Festival in Miami for the Super Bowl two days ago, sharing the stage with top acts like Cardi B and Migos.

“It was a great experience ... . The excitement and vibes building up to the event. There was no intimidation to perform, but performing with artistes with high leverage and platforms inspires me to build my set some more and performance skills to get to their level,” said Koffee moments after landing at the Norman Manley International Airport yesterday afternoon.

But even amid the ecstasy of Grammy glory, the 19-year-old Rapture artiste said "it was business as usual" the following day.

“We got up and went to a photoshoot ... . I had to go to work. That’s what my life is and I have come to grasp it for what it is and appreciate it,” she said.

The singer, who is signed to Columbia Records in the United States, jetted home accompanied by her team, including her mother, Jo-Anne Williams. She expressed appreciation for the outpouring of support from Jamaican fans.

“I am elated to be so strongly supported by my country. I am thankful for the continuous push and motivation from my fellow Jamaican people," said the artiste, whose real name is Mikayla Simpson.

"This has been an honour and the accomplishment makes me look forward to doing more. It motivates to inspire other youth and to highlight us as a country and put us on greater platforms as I go along in my career.”

Recalling the morning of the Grammys, Koffee shared that woke up “super early" and couldn’t go back to sleep, but her gusto disappeared when she and millions across the world were hit by the shock news that basketball star Kobe Bryant had died in a helicopter crash hours before.

"It was already a gloomy morning. That news changed the entire mood and we went about all we had to, but it was quite an experience to be in LA on that day.”

But the Toast singer admitted that her pulse raced with excitement as arrived at the Staples Center, where the announcement was made, brimming with anxiety.

"I kept on saying, 'The reggae category is coming up.' Expecting them to call the name of the winner. When they got to the category, and said, 'And the winner is … Rapture.'

"I swear to you, it never connected, because I was like, that’s not my name.”