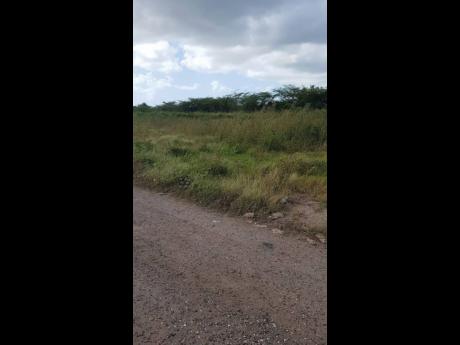 Contributed
The wild vegetation parallel to the Vernamfield aerodrome in Clarendon.

After initial debushing work to clear brush and cut down trees parallel to the Vernamfield aerodrome in Clarendon, residents supporting the development are now disappointed that “talk is the only thing happening”.

Massive trees which flanked the runway were cut down under the initial $300-million allocation to start the programme which has been a decades-long dream of 84-year-old Mike Henry, minister without portfolio in the Office of the Prime Minister (OPM).

Henry is a nine-term member of parliament for Clarendon Central, although the development is located in the neighbouring constituency of Clarendon South West.

The money, according to the Airports Authority of Jamaica (AAJ), the lead agency on the project, has been set aside to carry out the initial activities which include erecting fences and gates, primary electrical connection and distribution, and runway testing and rehabilitation.

“Nothing is going on. I go there every week. It’s a project in my division and we were told of the plans,” said Carlton Bailey, councillor for the Milk River division where the project is located.

“Some pipes are laid and some patching of the roadway should have been done. But since the big trees were cut down and it was cleaned right down to dirt, nothing else has happened.”

When pressed on the bushing maintenance programme, Bailey, who represents the opposition People’s National Party, added: “Yes, I am sure. Come and look for yourself and see that everything grow back except the trees. After the initial clean-up, only expensive talk going on now. Nobody can tell me this not a feeding tree for selected people.

“Basic common labourer work was provided by citizens from the area. Outside of that, all the contractors, except for one, came from outside. The municipal corporation, of which I am a part, had nothing to do with it.”

No timeline for project conclusion

He could not say if there was a maintenance manager for the property.

The runway provides roadway for traffic to link communities in the area, he said, but could not provide a timeline for the programme of activities to be concluded with the $300-million allocation.

AAJ point man on the project, Lieutenant Colonel Oscar Derby, could not be reached last week and neither could Henry. Derby’s second in command, Colin Leslie, also could not be contacted. The Gleaner was unable to ascertain how much has been spent so far.

However, Derby, when he met with residents, told them that the first phase of the project would see the start of general aviation activities, including hands-on flight training. He said Vernamfield would soon begin to look more like an airport, rather than just a track to go from Gimme-Me-Bit to the other roads.

One of the activities of the development plan is crop dusting – the spraying of powdered insecticide or fertiliser on crops, especially from the air. It is another activity to be undertaken in the largely farming community, but one with which Bailey has a problem.

“How are they going to prevent persons from being affected by the spraying? If you are going to kill out weed by aerial spraying, can you control the effects on persons nearby? I don’t think so,” he posited.

Hangars to accommodate aeronautical activities – transferred from the Tinson Pen aerodrome – and space for parking and buildings for the general public are also part of the planned US$2.5-billion development.

Henry’s aerotropolis concept is an urban development where cities are built around airports for speedy connectivity among suppliers, manufacturers, distributors and business people.

The concept combines airport planning, urban planning and business site planning. It is part of the long-discussed logistics hub development.