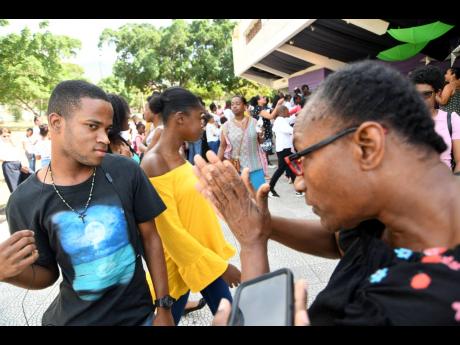 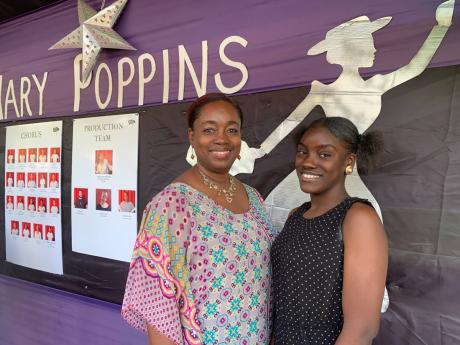 The overturned table of cake icing ingredients slowly returned to their original position. Eggs first, the bottle of milk, and then the bowl – all being pulled by almost invisible strings.

His mouth opened in awe, and immediately, he nudged the girl beside him, seemingly asking her, “Did you see that? How did that happen?”

He gave his name as Tahj and shyly signed, “No, Miss, not me,” when The Gleaner requested an interview during the intermission of a special theatrical performance of the 1964 film Mary Poppins.

The Jamaica Musical Theatre Company – Junior Theatre offered up a treat for an audience of more than 150 deaf students at the Philip Sherlock Centre for the Creative Arts yesterday to the narrative of the Banks’ family, which had had little luck with nannies until Mary Poppins came across their doorstep. Through music and adventure, she helped the children to become closer to their father.

Captivated by the quick action and colours, their eyes danced between sign-language interpreter Antoinette Aiken and the stage, their fascination at its height as the scene changed from the bedroom to a starry night and a luminous crescent moon.

Through an interpreter, 18-year-old Daniel Hyatt, a student from the Jamaica Association for the Deaf (JAD) Port Antonio Unit, told The Gleaner that he enjoyed watching plays.

“It was great!” said Hyatt, who hopes to become an electrician or interpreter, who shared that the high point of his experience was “when I saw Mary Poppins flying out”.

It was Abigail Swaby’s first time watching a play, and from all indications, she would watch it again.

Swaby, a grade 11 student at Lister Mair Gilby High, said that she was captivated by the scene where Mary Poppins taught the two children, Jane and Michael Banks, the importance of respect and taking care of their toys.

Swaby was one of the six students Williams took to the musical.

“I thought it was important for them to get an opportunity to go out, to get the exposure of coming to see the play, because they learn through visuals, so for them to come and see a play like this, it’s very interesting,” the teacher said.

The curriculum of schools for the deaf requires students to do presentations as part of their assessment.

“Seeing something like this would activate the brain, would help them to see how other people carry across a message, and then that should help them to go back and to prepare presentations for their classes,” Williams explained.

Students from Deaf Sports Jamaica, the Danny Williams School for the Deaf, and Caribbean Christian Centre for the Deaf also turned out for the musical.

The two and a half hour musical was sponsored by the Digicel Foundation. CEO Charmaine Daniels explained that the telecom provides literacy rooms to some institutions and that the musical was another means of broadening their communication abilities.

“You don’t really have a lot of performances or anything in the arts that allow the children to interact or even understand what’s happening. Special needs is one of our core pillars, and it’s fitting for us not only to deal with education, but allow them to have some fun as well,” she said.