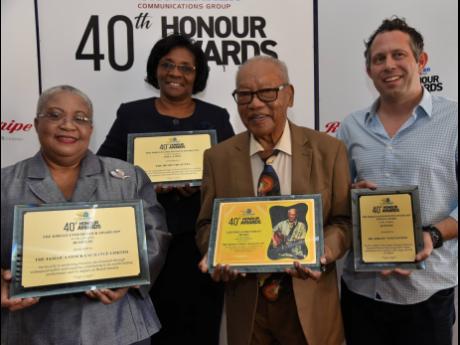 On Friday, February 28, the excitement of the 2019 RJRGLEANER Honour Awards Gala Dinner will unfold at The Jamaica Pegasus hotel in New Kingston, where the communications group will recognise deserving individuals or organisations for extraordinary work in various areas.

The awards, to be handed out in the categories of arts and culture, sports, science and technology, entertainment, public service, education, voluntary services and business, have been selected from the 102 nominations received by the RJRGLEANER Honour Awards Committee up to December 5 last year.

The awards recognise the initiative, accomplishment, and courage of people and organisations that contributed significantly to improving Jamaica’s quality of life at any time in the preceding 12 months or is likely to bring about such a change in the immediate future.

“We have won many international awards, but to be recognised at home is special,” Epstein said.

“It will propel us to go forward and do more in terms of creating that image and that opportunity for all Jamaicans to invest and do well here and abroad,” she said.

Dr Janet Dyer, managing director of the former HEART Trust/NTA, used the occasion to advise that following on amendments to the act governing its administration as well as the repeal of the National Youth Service and Apprenticeship acts, the institution is now known as the HEART National Service Training Agency Trust.

Dyer gave the assurance that the national training agency, now in its 38th year and being recognised with the award for education, remains committed to its mandate of developing the country’s human capital.

“We invite everyone to join with us to develop the human capital that leads to economic growth because if we don’t get to that point, we will not realise our Vision 2030 goal,” she said.

Eighty-seven-year-old Ernest ‘Ernie’ Ranglin, who will receive a Lifetime Achievement Award for Entertainment, inspired a round of applause with his acceptance speech.

He thanked the committee for recognising his efforts while doing something he spent decades enjoying before retiring two years ago.

“I am very much excited because I have been doing this thing for a very long time and I didn’t expect it (award),” he said while declaring that now that he is retired, he would look into giving back.

However, this architect of modern Jamaican music, who also excelled as a musical director and key arranger, having started fooling around with his uncles’ guitars at age four, expressed the hope that those who would follow in his illustrious footsteps won’t have things as hard as he did.