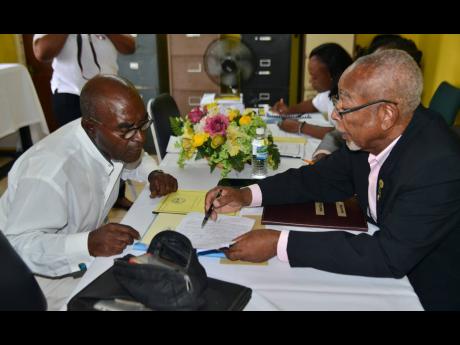 In 2011, he lost by 107 votes to incumbent Rudyard Spencer, who polled 8,843 votes. He received 8,736 when he ran for the PNP, but on Wednesday he was nominated as an independent candidate for the March 2 by-election.

A businessman, who was for years associated with the sugar industry when sugar was king, Lambert was born and raised in the district of Vere, Clarendon.

His intimate knowledge of the industry gave him early insight into the impending disaster the European Union (EU) decision to pay 39 per cent less for sugar from African, Caribbean and Pacific (ACP) countries would have had on the local economy.

The price cuts began in 2006 on a phased basis.

At the time, Monymusk and New Yarmouth sugar estates – both located in the district of Lambert’s birth – were the largest employers of labour in the parish, employing nearly 1,500 persons, two general elections before.

Before his entry into politics, he was chairman of the Clarendon Industrial Provident Society (CIPS), a group which sought to provide new businesses to keep the local economy buoyant post-sugar price cut. The Milk River spa development and marketing was one of the business ventures targeted under CIPS.

It was not immediately clear how successful the business ventures became.

Lambert, who was also a director of the Clarendon Chamber of Commerce, based in May Pen, threw his hand into the political arena in 2011.

If Lambert beats Pearnel Charles Jr in the polls, he would become the first Independent candidate to win a seat in Parliament. Peter Bunting became the first member of the PNP to take the constituency in 1993, when he beat former prime minister and Jamaica Labour Party leader, Hugh Lawson Shearer.

Bunting won by 1,343, according to Electoral Commission of Jamaica statistics, and Shearer later retired from politics.